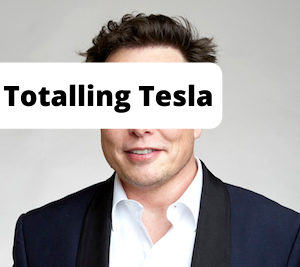 I sold my Tesla shares too soon, for spurious reasons. It’s the biggest single investing mistake I most regret.

Anyone who picks stocks or studies active fund performance will know how a few multibaggers can drive the total return.

But we should see owning multibaggers in our portfolios as a feature, not a bug.

A multibagger is a share that goes up by multiples of what you paid for it.

If you hung on and it hit £50, that’s a five-bagger to boast about on Reddit.

Passive investors, too, will see multibaggers driving returns at the index- level. Some (disputed) research suggests only a tiny handful of stocks are responsible for the majority of the market’s long-term gains.

How often in 2020 did we see charts like the one below from The Financial Times? Usually alongside warnings that a handful of giant tech firms – the FANGs – were behind the market’s advance:

Pundits warned that mega-cap multibaggers like Apple and Amazon had grown to represent a massive share of the S&P 500.

Passive investors are lucky their robot funds aren’t subject to the whim of a human manager musing how: “Nobody ever got fired for taking a profit.”

Maybe not – but selling winners can still be bad for their clients’ wealth.

How I messed up with the stock of a lifetime

The good news is you don’t need to pay a career risk-dodging fund manager to lose out by selling multibaggers too early.

No, with enough time, money, and stupidity you can do it yourself.

Just (please don’t) ask me about my Tesla shares.

I’ve put off publishing this article on how much I lost trading Tesla shares for months now.

Not only because at Monevator we believe most people should be passive investors in index funds – and I’m about to show you another reason why.

And not even because it’s embarrassing.

No, mostly it’s because I’ve had to keep re-editing the headline.

This shifting loss isn’t because I was trading thousands of Tesla shares every day on Freetrade.

And I wasn’t doing anything so dumb as shorting a great company. (That’s best left to hedge fund geniuses.)

I was a fan of Tesla for a decade and a proud shareholder for most of it, too.

Now I know what you’re thinking.

You reckon I didn’t really ‘lose’ money trading Tesla shares – no more than your gran lost money by not buying shares in fancy pants firm Lululemon.

Or than you lost money because you didn’t buy Bitcoin in 2010.

I take the point. There are an infinity of missed opportunities out there.

But the opportunity cost I’m talking about with me and Tesla is different.

Roughly 99.99% of people didn’t know anything about Bitcoin in 2010. If you did you probably called it bollocks.

That was why you (and I) didn’t buy Bitcoin back then.

As for your 79-year old grandma getting into Lululemon…let’s not go there.

But the sad reality is I did own Tesla shares. This isn’t a hypothetical.

I hugely admired the company and I judged early that Tesla could be worth at least $100 billion someday.

Indeed I’m as close to an Elon Musk fanboy as a rational, slightly envious middle-aged curmudgeon can be.

Yet I still sold my Tesla shares.

When you’re a naughty active investor like me, the profits you miss are as important as the losses you inevitably book.

They’re all mistakes. They all count. Even if the gains foregone are hard or impossible to calculate.

But the upside is theoretically unlimited – as Tesla been demonstrating:

This asymmetry in the downside of loss versus the potential for uncapped gains is why selling can be so costly.

Monster gains will make up for a myriad of flops in your portfolio.

The good news is I do own Tesla shares today, even after my idiocy.

The bad news is I owned many more just a few years ago.

How many? Let’s step back in time.

It’s December 2012 and I’m minding a friend’s house in the country.

It’s a big house, and it’s snowing outside. There’s even a log fire!

All very Dickensian, and like in all Dickens’ most popular novels I’m considering making an investment in an electric vehicle start-up.

Specifically, I’m reading about Tesla and how it’s hated by the market.

Some doubt Musk. Some say only nerds will ever want electric cars. Others concede electric cars are the future, but they doubt Tesla.

I see risks, too, but also immense potential.

By 2012 I’ve been tracking solar energy for years. I believe a turning point in the economics is approaching.

As for Tesla, by December 2012 CEO Elon Musk was a proven entrepreneur – something ignored by his critics, who inexplicably call him a fraud.

And Tesla’s second car, the Model S, was out to rave reviews – a fact brushed off by Tesla’s critics, who inexplicably call the firm a sham.

Technology and growth shares languish in late 2012. People are crazy for gold miners and dividend payers.

My contrarian senses are tingling.

So I bought some Tesla shares. Just a few, due to the risk, priced well below $10 a pop.4

We don’t need to be precise – because within a month I’d sold them!

Happily though, I bought back into Tesla shortly thereafter.

What I thought people had wrong about Tesla

The value of my Tesla shareholding pretty much doubled in a few months.

But I just sat on them. I ignored the controversy and the high-profile shorting and the prophecies it would go bust.

I was never very concerned about Tesla running out of money, for two reasons.

Firstly, the world is awash with cash looking for returns. Yet the fastest-growing companies of our time don’t need our money to grow.

Tech giants like Facebook and Alphabet are asset-light and cash-rich. Unimaginable profits have been made with very little capital, turning the notion of capitalism on its head.

Tesla though is old-fashioned in that it needs vast amounts of capital to build factories to make batteries and cars, as well as to write software.

This was touted by bears as a weakness, but I saw an opportunity.

Provided Tesla kept demonstrating progress, I believed capital would flood in to profit from a rare modern industrial-sized scale-up.

Secondly, I heard one of Alphabet’s founders say he thought the best use of his billions might be to give it to Elon Musk.

Many others in Silicon Valley also admired Musk as a one-off genius.

I saw this as a ‘put’ on Tesla’s solvency. I believed Tesla could go nearly bankrupt at least once, yet be bailed out by Elon’s billionaire buddies.

Rightly or wrongly, this belief was an uncommon insight (I don’t claim unique) that I had versus the market.

Of course I loved the cars and the mission and Tesla’s roadmap.

But my contrarian beliefs on funding were my thesis for being long Tesla.

I held Tesla as the cost of renewable energy fell, climate science became consensus, and as Tesla made more cars.

For capital gains tax management reasons I did trade around my position in 2016. I defused some of my unsheltered Tesla position and bought back in a tax efficient account. My shareholding fluctuated.

Let’s count my pseudo-losses from there.

Mr Market makes a fool of me

My first mistake was I sold some shares in 2017, for reasons I can’t recall now. Most likely I wanted funds to buy something else.

But what eventually did for my entire Tesla shareholding was my growing concern about Elon Musk’s mental state.

Unlike most people nowadays, I don’t expect public figures – let alone geniuses – to live their lives without warts and all.

Have you met other humans? Looked in the mirror?

We all have flaws. The only difference is most of us are not tracked 24/7.

All the great artists, business people, and politicians of history had quirks at best, and at worst, much worse. They were lucky to be born before Internet pile-ons.

So I wasn’t worried that Musk was outspoken or eccentric.

However I was concerned that by 2018 he seemed to be struggling to cope.

Investing in Tesla for me was betting on Elon Musk. My thesis was that his friends and admirers would support him, at the last resort.

But if Musk himself was impaired then that went out the window.

During 2018 Musk trolled the regulatory authorities, suggested he’d take Tesla private in a random Tweet, and started a bizarre name calling bout with a British cave diver, among other things.

My concerns compounded. I was still enough of a believer to actually buy more shares when Musk made his infamous funding secured Tweet in 2018. But eventually I started to see his antics through the eyes of his critics.

I sold all my shares.

I’m not going to dwell on my reasoning any further. I made lots of bad investing decisions in 2018 and most of 2019. I had a big mortgage for the first time in my life. It screwed with my judgement for a while, I suspect. It made me fearful.

The bottom line is that by June 2019 I was completely out of Tesla.

Even better – especially if you hadn’t recently sold all your shares in his baby – Musk was stabilizing. Still eccentric and insufferable to some, but to me he looked like he was having fun again.

And so the pain of trying to buy back into Tesla began.

Probably the only thing worse than selling out of a multibagger is regretting doing so just as the price goes parabolic.

That Tesla graph again, once more with feeling:

Buying most of the way up Tesla’s ascent was profitable – with hindsight.

But good luck biting the bullet if until relatively recently you had a cost basis of under $10 a share. The struggle is real.

I dithered for months but did eventually start to buy back into Tesla. I paid as much as ten-times the price where I’d sold. Or nearly 100-times above where I’d first bought Tesla in late 2012.

For a while I also had exposure via Scottish Mortgage Trust, which I bought during the Covid crash. It owned a garage full of Tesla, and rallied hard, too.

I traded around my new Tesla position and I’m up well into five-figures from its crazy stock price rally, all told.

Especially as I’ve also ignored the gains I made from initially selling Tesla. I didn’t sell my shares for nothing!

I’ve also not accounted for what I made from reinvesting that liberated money. Most boats have risen over the past couple of years, after all.

But life is too short for all that maths when this is a story, not an academic paper. My aim was to give an illustration of the cost of missing multibaggers.

These things happen if you invest actively. You’re hearing from a man who once sold ASOS at around 30p. Today it’s more than £55.6

But the fact remains I really would have more than £300,000 in Tesla right now – even at today’s much lower stock price – were it not for my mental wobble.

That would have been enough to buy half-a-dozen Teslas. From investing less than £20,000.

Let that be a lesson to you – and me – and all that malarkey. Harrumph.

Luckily I’ve managed to hold on to other stocks that have multiplied in value, so don’t miss my follow-up on multibaggers. Subscribe to ensure you see it!

Next post: Weekend reading: Who will win the platform consolidation prize?