Have your say on the future of pensions

The UK Government is asking for our opinion on the future of pensions. It apparently wants to know how to incentivise people to save more for longer so we don’t wind up with an OAP underclass that hangs around post offices all day and shakes down youngsters for their pocket money.

The deets are in this consultation paper on pension tax relief reform.

Feedback is requested from engaged individuals. That description certainly fits the Monevator massive, so I’m going to sling in my two pennyworth in this article and I’d love it if you could add yours in our comments thread.

I’ll then bundle up our collective response and send it to HM Treasury, 1 Horse Guards Road as the Monevator community’s contribution.

That’s surely worth at least four pennies in anyone’s money!

Shaping the future of pensions

Because our golden years are stretching out for longer, the government wants pension reform to fit the following principles, as laid out in the paper:

That last one is particularly interesting when twinned with the following statment:

The government wants to make sure that the system of support for pension saving encourages individuals to save a larger amount for a longer period of time.

The gross cost of pensions tax relief is significant. Including relief on both income tax and National Insurance contributions, the government forwent nearly £50 billion in 2013-14.

In other words, the reform sweet spot would prompt people to save more of their own money, enable the State to step back – and kibosh the “Please sir, can I have some more?” routine.

There’s a clear implication that relief may be less generous in the future, especially as only a third of the relief currently goes to basic rate tax payers (although perhaps that wouldn’t be so skewed if the higher rate tax bar had been moved up with inflation).

One suggested change is taxing pension contributions upfront while withdrawals are made tax-free. Pension tax relief would apply on the way out, not the way in, just like ISAs operate today.

This need not leave us any worse off but I can think of a slew of reasons why such a change would be a bad idea.

The number one reason that a change to ISA-style funding would not get my vote is that trust in government is poor.

Every time the slightest change to pensions is mooted, our comment columns swarm with doomsters predicting political chicanery and Argentine-style confiscation.

So I can imagine the reaction to the mooted change: “Yeah, well, they’ve nixed upfront tax relief now and in ten years time they’ll abolish it at the other end, too. I’m burying my savings in a river bank.”

Such a conspiracy theory would be impossible to disprove.

Give me the bonus upfront, and at least I know I’ve got something out of the deal. Promise me help years from now and well, hey, given the current level of faith in the political elite, it’s hard to think of a better way to torpedo saving short of exchanging lottery tickets for contributions.

The real problem with the current incentives is that they’re poorly communicated, intangible and obscured by off-putting technical language that’s alien to most people.

That dissipates the power of those incentives to help people overcome the hurdles they face when trying to save.

It’s like handing people an amazing energy bar but marketing it as soap – all very well, but I don’t get how it’s gonna help me right now.

Why is pension saving so hard? 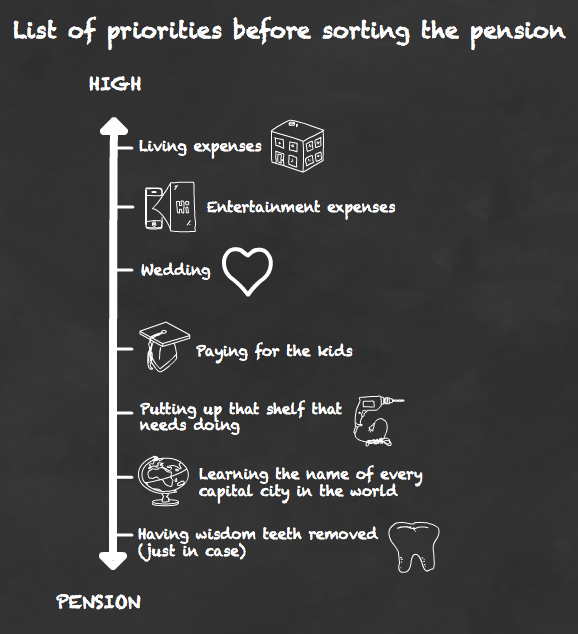 In my experience, the fundamental problems many people face when saving for their pension revolve around means, human nature and knowledge:

In my view, the reasons people don’t save enough for their old age have far more in common with these sorts of realities than with the tax relief system.

Many people don’t understand how important saving is, how much they need to save, in what product, and for how long.

And, sadly, many don’t understand what help is available or how much difference it makes.

The antidote is trustworthy, straightforward guidance that suits the majority who struggle to engage.

Firstly, the incentive has to be upfront. Given the problem we all have with imagining the future, you’d have to be insane to think that offering tax relief years hence is more motivating than dangling loot now.

But you do need to make the offer obvious.

What do retailers do? They give us money off. Three for the price of two. Cashback. And in big bright happy shopper flashes.

This is the language that employer contributions and tax relief should be couched in.

A basic rate tax payer who saves £1,000 into their pension?

You’ve more than doubled your money!

This information should be on your payslip and in an annual statement from HMRC. Make it simple and make people feel smart for being on board.

The message should be this clear:

Who would turn down that kind of money?

Email the statement if it costs too much to post. If you didn’t take your maximum employer match, then the statement should show how much money you’ve given up in match and relief.

It’s true that if I – a personal finance blogger and investing nerd – really work hard at it, I can already see my employer match and work out my tax relief using my payslip. But the information is obscure and in small type and buried in lots of other numbers that are similarly mysterious.

This stuff should clangingly obvious. Otherwise it doesn’t sink in.

And don’t use terms like net income or gross income. Don’t use percentages or codes. Maybe that’s technically correct, but it impedes understanding. People don’t have time to learn to speak alien.

Hold a national design competition to create a brilliantly simple template for payslips and the annual statement. Ask employers to sign up to it in the interests of their workforce.

With the incentives properly promoted, how do we get people to put the right amount in?

According to the consultation paper, the average employee contributes 9% of their annual income to defined contribution pension schemes.

But the Pensions Policy Institute says a low earner needs a total contribution rate of 11% to have a 75% chance of replacing their income. Median earners need to save 13%. High earners 14%.

I’ve read a lot about how we need to save 15% of income from wealth management advisors. Frankly, it would be another ball game entirely if a widely respected independent body put out that kind of guidance.

Again, the guidance should be boldly proclaimed on every pay slip and annual statement.

The average person should save 15% of income to have a reasonable chance of retiring on 75% of their current income (including the State Pension), according to research by the ONS.

You are currently saving 5% of income. Please talk to your pension provider if you would like to change the amount you save.

Note, I’ve just made the above numbers up and have sadly been forced to break my own rule on percentages in the name of keeping the admin manageable.

There would need to be a debate on what a reasonable chance means and what figures would be used for the percentage of income people typically need in retirement. But the advice industry already revolves around rules of thumb like this so it shouldn’t be impossible to come to an agreement.

To address the issue of saving now – and saving early – I’d put in a compound interest line.

Something along the lines of:

Every £1 saved now is the equivalent of £1.50 saved in five years time.

Again, I’ve made the numbers up, but you get the gist.

Finally, when it comes to the mind-meltingly complex fund scene, Dutch-style collective pensions look like a good bet for reducing the confusion. The evidence suggests that on balance this system offers lower costs, better outcomes and higher rates of participation.

It wouldn’t surprise me at all if the higher participation rates are partly due to there being a consensus that signing up to these funds is a ‘good thing’.

That kind of reassurance is impossible to find amid the UK’s fragmented landscape.

Many of my suggestions are a one-size-fits-no-one kind of a deal, but frankly, where defined contribution pensions are concerned, it’s a crapshoot anyway.

The best you can do is be roughly right and for all the talk of ‘bespoke solutions tailored to your personal circumstance’ it’s rules of thumb that, well, rule.

Most people need very basic guidance that points them in the right direction – and providing it doesn’t stop anyone from delving deeper into the topic and coming up with a solution that they think is better suited to them.

The current ‘you’re on your own’ model is every bit as conscious a design decision as my proposals.

The difference is that the existing nudge-free approach is demonstrably leaving huge numbers of people high and dry.

P.S. Here’s a summary list of questions that the report asks. Please have your say in the comments below and we’ll send the lot to the government’s pension and savings team as requested. 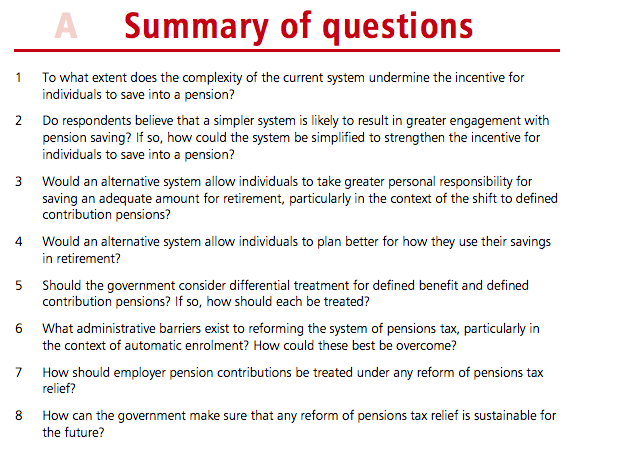 Next post: Weekend Reading: Throwing another leg of lamb on the barbie