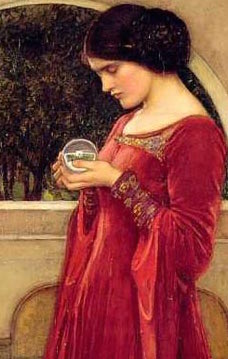 Before buying a TV or a toaster, I check out the reviews. Of course I take them with a pinch of salt. But if a few sources give one model a high rating and say another is better used for scrap, that’s meaningful.

In the wacky and weird world of investing, this approach can lead you astray.

A reader asked us:

Do you know why the Vanguard FTSE INDEX Fund is only rated as 2 Stars?

This reader is doing his or her research, and it’s a sensible-sounding question.

And they seem to be sensibly questioning what we write, too.

The question was in response to our latest Slow & Steady model portfolio update. Several Vanguard index funds are in that mix.

Now, I’m not sure exactly which tracker fund the reader is referring to. The fund name they have given us is too short.

We can see Vanguard is the fund provider. FTSE is the index provider. And ‘Index’ tardily confirms that yes it’s an index fund – but we’d need more to know which specific fund.

Superficially, this matters. One Vanguard ‘FTSE index fund’ in the model portfolio has a five-star rating at Morningstar. Another has a four-star rating.

But perhaps the reader was referring to one we don’t use, the Vanguard FTSE U.K. All Share Index Unit Trust Accumulation Fund. This mouthful does sport a two-star rating.

No matter. From the perspective of a passive investor, you can ignore these ratings altogether.

Stars in their eyes

According to the Financial Conduct Authority (FCA) 2016 report into the asset management industry:

The Morningstar Star rating is a quantitative, risk-adjusted comparison of historical fund performance net of costs.

The methodology is applied to active and index tracker funds, and makes no distinction between them.

We have found that the methodology used to generate this rating means that index-tracker funds are likely to be assigned an average rating and generally only a minority of these receive a high rating.

So index trackers are more likely to get average ratings.

Eek! This might sound like a reason to use active funds. But let’s pause for a moment before we wheelbarrow our money down to The City’s bonfires.

One landmark UK study found over 70% of active funds failed to beat their benchmarks over ten years. A more recent US study (cited by the Financial Times) showed 99% of actively managed US equity funds underperform.

Then again, the system rates funds against funds, not mere benchmarks.

So sure, the average fund is average. But what if the top-rated funds – the five-star funds – did beat the benchmarks? Wouldn’t index funds then be justly consigned to average status, and shouldn’t we all buy five-star active funds?

Maybe, but that isn’t the world we live in.

According to the FCA:

We found that 5-star share classes do not significantly outperform benchmarks net of charges; net-of-fees excess returns above benchmarks; this means that after charges the returns above the benchmarks are statistically indistinguishable from zero.

There’s a lot of long words there. The important ones are: “statistically indistinguishable from zero.”

The five-star funds do not beat their benchmarks over the periods studied.

Morningstar recently admitted as much, with the FT reporting:

Morningstar, a UK fund rating agency, said its rated funds on average had not outperformed their sector benchmarks net of fees since the financial crisis.

So no reason to swap cheap index funds for expensive active funds, after all.

Now before anyone at Morningstar throws in the towel and takes up gardening, their ratings are not completely useless. If you’re an active investor they may be worth a look.

The FCA found that over periods of three and five years:

If you’re dead set on active funds, it’s worth knowing the top-rated funds did better on average. (For its part Morningstar says a review should also consider longer time periods.)

But what the FCA report seems to be dancing past is that five-star funds don’t beat the market. See the earlier comments I cited.

Which means fewer-than-five star funds presumably do worse than the market.

Which begs the question: Why take a chance on active funds at all?

One reason might be because you’ve been encouraged into active funds by Best Buy lists and other promotions by platforms.

Oops! You best sit down. The FCA has some unfortunate news.

Firstly, such lists only offer a token nod towards passive index funds. The FCA found that’s better than in the old days; before 2014 no passives featured on any lists it studied.

The FCA looked at the lists of five platforms.

For a passivista this table makes grim reading. We know index funds do better than active on average but they make up less than 10% of the Best Buy entries.

A market-beating active fund would be better to own than an index fund that lagged the market by costs. Maybe the Best Buy lists are the fabled treasure maps that show the way?

Ha ha, only kidding. According to the FCA report:

“…we note that after costs even these funds have not outperformed their benchmarks.”

No treasure here then.

Now, as with the Morningstar ratings the Best Buy lists are not entirely useless. The FCA found that funds on the lists did do better than funds not on the list.

But that doesn’t change the wider point. If even the Best Buys don’t outperform, why gamble on them when you can get the market return from index funds?

If they knew better most investors wouldn’t risk it.

The FCA paints a picture of investors being steered towards active funds for no good reason.

You see the same thing in newspaper and magazine articles.

I’m loathe to name names – our own website is hardly without faults and biases. But for instance one big publication’s podcast always runs through a laundry list of active funds to end its discussions. Passives are rarely if ever name-checked.

Okay, so if the media, the ratings and the Best Buys lists aren’t doing the greatest job, how should you pick a fund?

Well, we think most people are best off deciding to go passive. Once you’ve made that decision you can run through the selection process we’ve described before.

For shares you might simply choose a good world index tracker fund. Indeed you might be best going for an all-in passive product like the LifeStrategy funds.

If you had to look at just one metric, then rather than ratings or Best Buy lists you’d do better looking at fund fees.

According to an article by Russel Kinnel of Morningstar:

We’ve done this over many years and many fund types, and expense ratios consistently show predictive power.

Using expense ratios to choose funds helped in every asset class and in every quintile from 2010 to 2015. 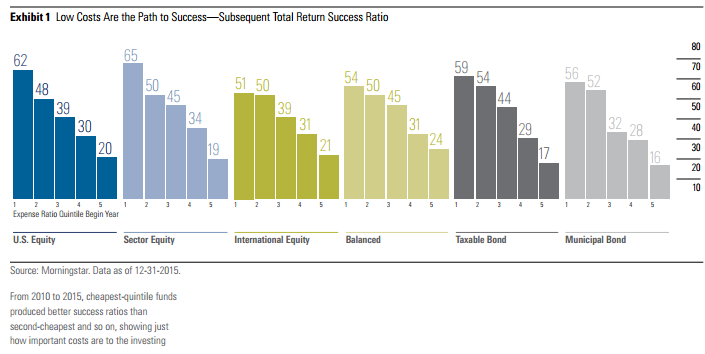 The ‘success ratio’ here means a fund staying open and outperforming their group.

Of course all this data does is steer us into index funds via another route. In theory equally cheap active funds would be candidates for consideration. But in the UK costs don’t compare and it’s hard to see how they ever could on a long-term basis.

Investing is a matter of choices. Most people have no business striving to outperform the benchmarks, given the poor odds. They should choose to get broad exposure to markets via index funds as per their long-term plan.

But if you do want to try to beat the market with active funds, remember the odds of success are low. You’re unlikely to keep your money in the few market-beating funds. And the maths of high fees is always against you.

To illustrate, the FCA found that:

That’s a massive differential. Why compete in a worse than zero sum game? Why not let someone else buy an expensive fund manager his sports car?

Well, it’s a free world and good luck if you must try. Fund ratings and Best Buy lists might offer some starting points for research in that case.

But for passive investors, they are best ignored.