Looks like it’s game over for cash rebates and the last surviving refuges where small passive investors are spared the pain of significant platform charges.

Within a year, we’re going to be choosing from clean class funds with slimmed down OCFs1 (Hooray!) while paying beefed-up fees for our platform / fund supermarket / execution-only brokers (Hiss!).

New rules from The Financial Conduct Authority (FCA) will abolish commission-based payments for DIY platforms, bringing them into line with the RDR revolution that hit financial advisors on the eve of 2013. 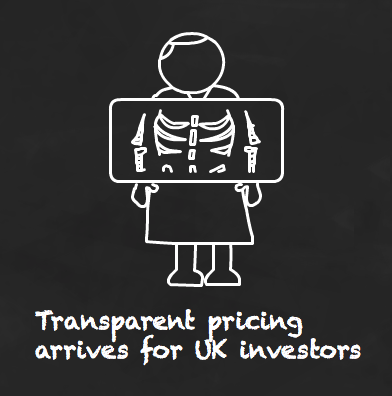 It’s a massive shake-up for the industry that will force many investors to rethink their choice of funds and brokers.

We’re in for a prolonged buffeting from the bow waves of change as a result, so here’s Monevator’s navigational guidance:

Platforms will no longer be allowed to present themselves as ‘free’, while actually carving out a living from the inflated annual management charges (AMCs) that most investors think go to fund managers.

The idea is that investors will know exactly what they’re paying in fees and that will incentivise platforms to become more competitive.

Fund groups like Vanguard, that refused to pay commission, will become more widely available and put greater cost pressure on the rest of the fund industry.

Fund groups won’t be able to use fat fees to push for undue prominence on platforms, supposedly. They’ll probably buy adverts instead.

The FCA has warned the platforms and the fund groups that it’s got its beady eye on them and won’t put up with any naughties.

The financial industry is abuzz with theories on how platforms might circumvent the rules. No-one really believes this is ‘over’.

Unit rebates (along with cash rebates) are now subject to income tax (outside of an ISA or SIPP). They are on the way out like a football manager after a bad run, which is likely to lead to…

In other words, Platform A stocks Fund X with an OCF of 0.75%, but Platform B uses its market muscle to get the same fund for 0.65%.

If you’ve ever stared at MorningStar late at night trying to work out the difference between the F, R and I versions of a fund (what, just me?) then you may well fear supping from the alphabet soup that many in the industry are predicting.

On the other hand, if platforms are able to force down fund prices then investors benefit. I have a feeling that they won’t be scrapping over the lean index fund pickings, anyway.

You have just under a year to choose your new investment home – unless you’re lucky enough to be with a super-competitive broker already.

We’ll keep our broker comparison table updated to help you make an informed choice in the months ahead.

Right now, the market approach to platform fees for clean class funds is split in two:

Percentage based fees – The best approach for small investors. Charles Stanley Direct and TD Direct charge along these lines.

To calculate whether you’re best off with flat rate or percentage-based fees:

Estimate the best annual flat-rate platform charge you can get including trading fees. Divide that number by the best rival percentage charge.

That number is the breakeven point. At that point, a portfolio worth £24,000 will pay the same platform fee (£60) regardless of whether your broker charges a flat rate or a percentage.

If you’re well under that figure and will remain so for years then go for the percentage based platform.

The example assumes you can buy an identical portfolio of funds at either broker. If not, then our article on clean class funds will help you factor in fund OCF differences.

Most brokers have yet to wean themselves off the commission sugar. There will be a flurry of activity in the next six months as they work out a platform charge fit for the new paradigm.

I believe the majority of investors will be better off sitting tight and waiting for the shake down. Moving your portfolio can be a costly business, so it’s best to do it only the once.

Until April 2016, if you’re sitting on a heap of old-style funds then you will only incur a platform charge on the portion of funds that are sold or ‘changed’ after April 6 2014.

Change does not include:

By 6 April 2016 all funds will be converted into clean class anyway, and commission payments will cease. Not long now.