Josh Brown is concerned. The financial advisor and TV pundit behind The Reformed Broker blog sees a new kind of fear and greed out there:

I would label this type of fear Insecurity. The fear of being left behind and looking like a fool.

Every couple of years Josh – a hyper-connected poet of the markets – sticks a pin on the tail of the donkey of our times.

I think he’s done it again.

It’s true a strange new operating system is running the show these days.

If you spend the unhealthy amount of time that I do taking skin burns from exposure to market radiation, you see it in everything from fallen hedge fund titans bemoaning day-trading nihilists to the world’s best banker getting befuddled about Bitcoin to meme stock madness and the endless back-and-forth shouting of crypto and story stock tribalists.

Not even the purist passive investor can completely duck the fallout. Monevator’s voice of sanity, my co-blogger The Accumulator, has written candidly about his own brush with FOMO:

How do you respond when someone invents something fundamentally new (hello, crypto) that could be a game-changer or a ponzi scheme? […]

If you’re The Accumulator you sit on the sidelines like a hunter-gatherer who can’t believe this farming lark will ever catch on.

Meanwhile, you torture yourself with crypto-millionaire fables – because even a caveman has to have a hobby.

Of course @TA is too chaste to be possessed by the zeitgeist. Instead he just gets the odd hot flush wondering about what might have been if he’d only acted a little crazy, like everyone else.

Are we at a crescendo of craziness? A decade of gains in the dominant US market has sent its equity valuations into thin air. Meanwhile bonds look priced to do nothing more than fleece your pockets behind your back.

Perhaps we didn’t need overnight crypto billionaires, zero-cost stock trading, and a global pandemic that locked us in front of our computers to whip up this frenzy. But we got all that and more.

No wonder there’s a bit of a riot going on.

There will come a time when all this has passed. The thing to be seen doing will be to shuffle through the virtual town square bemoaning disruptive growth stocks, calling cash king, and flagellating yourself for claiming to have understood how Bitcoin works. Everyone will say never again and some will even mean it.

Eventually memories will die and a few on the fringes will hear a new beat. But that’s a story for another day.

Indeed I don’t think today’s climate is unprecedented – batshit bonkers though it may feel at times.

It reminds me very strongly of the late 1990s and the Dotcom boom.

I sat that out as an investor. But I was in the mix as a recent-ish graduate with a tech background and exposure to people getting rich quick:

Visiting an old friend at the company, I was amazed to see that many of these formerly artistic types, from the secretaries to my friend in management – now had shortcuts to stock tickers on their desktops.

They were entranced to see themselves become richer by the day  and they watched their share prices like parents cooing over a new baby.

The best companies today really are technology firms. They’re flush with cash and their profits are still galloping higher in a way that textbooks said was near-impossible.

I talked about this reversal on Monevator many years ago. Even today my active portfolio has more in tech than will probably seem wise in retrospect. The shares are expensive, but the companies are genuinely changing world.

No, it’s more that desperate edge to the missing out that Josh identifies that reminds me of the late 1990s.

Your investments are going up, but someone else’s are very publicly doing so at light speed. And that guy you knew from college is already a millionaire on TV. (Or more likely YouTube or TikTok nowadays).

Don’t stop ’til you get enough

Here’s a tiny anecdote from the Dotcom boom that seemed like a bad dream just a few years later, when the West was bogged down in a war in Iraq and we were 36 months into a bear market.

The scene is a beer garden with a couple of mates in West London in 1999. There I am making the case – again – for us quitting our jobs and starting a tech firm.

We’d been in the right place at the right time for what seemed like an eternal four or five years. And everyone was getting rich except us – but that wasn’t actually the worst of it.

No, what I remember feeling was exactly the existential insecurity that Josh talks about in his piece.

It wasn’t so much that there were big opportunities to make money that we felt we were missing out on.

It was a dread sense that this might be the last chance to get ourselves out of the doldrums and into the class of wealth generators apparently being airlifted to a new economy all around us.

History tells us the feeling was mostly nonsense. Lots of those paper fortunes evaporated. I knew founders who were back in a day job by 2001 and I wasn’t even especially startup-adjacent.

But the future didn’t feel like that in that pub in 1999. It was now or never.

Maybe the Dotcom boom was more localized than today’s global mania, which is why I feel this callback where Josh doesn’t.

Do I have antibodies lingering from those times? I hope so!

I’m not silly enough to predict an imminent crash. Markets can stay bananas for ages.

But this graphic from John Authers at Bloomberg shows we’re all-in on this together: 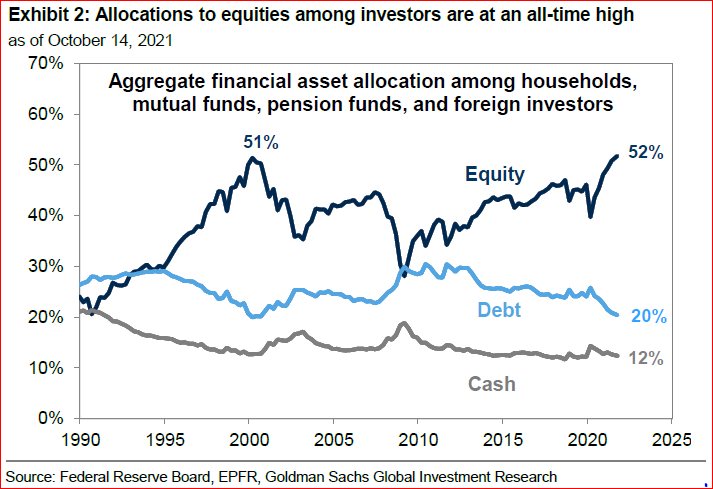 If this is your first time around the block, know that markets are bewitchingly cyclical. The next bear market will begin the day most people have forgotten they ever happen.

Enjoy the boom while it lasts, but have a plan or an asset allocation ready for the day when it’s done. (As a very active investor my plan is basically to run for the exits when the time comes before everyone else. I strongly you suggest you have a more sensible one!)

The important thing in the investing game is to keep compounding over the decades. It all adds up eventually. Never risk getting wiped out.

Meanwhile if this is not your first rodeo then you don’t need me to remind you these best of times won’t juice our returns forever.

Except, of course, you probably do…

The 60/40 portfolio: what the warning signs are telling us – Monevator

With city workers back in work, rents are headed up – ThisIsMoney

The shortages hitting countries around the world… – BBC

…including a surge in second-hand car prices – BBC 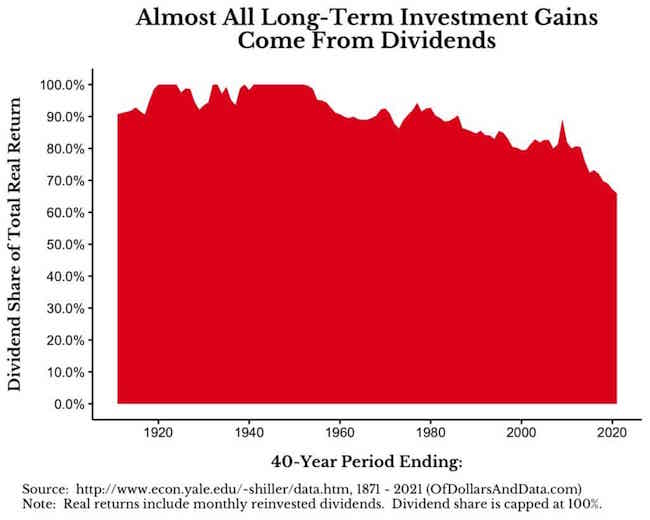 Ignore the price, remember the dividends – Of Dollars and Data

Yolt budgeting app to shut down to 1.6m users on 4 December – Which

Homes within easy reach of a school, in pictures – Guardian

The more runway you have, the safer you are – The Escape Artist

“It has been hard, unsurprisingly, to detect any benefits of Brexit. If there are some, it appears they may be accruing to non-EU exporters wanting to sell into Britain. I don’t remember that on the side of the bus.” – David Smith

Q&A with Robin Power, co-author of Invest Your Way To Freedom – Abnormal Returns

It all started with a giant computer in a Brooklyn apartment [Excerpt from Trillions, the big new book about the rise of index funds] – Institutional Investor

Is there survivorship bias in US stock market returns? – A Wealth of Common Sense

Trump should have invested in the S&P 500 – Validea

Bitcoin hits an all-time high above $66,000 on US futures ETF launch – CNBC

The case for (and against) Bitcoin as digital gold – Morningstar

From the archive-ator – Should Bitcoin be in your portfolio? – Monevator

The biggest opportunity of 2021 – Banker on FIRE

Rees-Mogg: Tory MPs don’t need masks as they know each other – BBC

How Money Works: The Facts Visually Explained by DK – £1.99 on Kindle

Island on the Edge: an extraordinary journey from city life to rural idyll by Anne Cholawo – £1.29 on Kindle

Quit like a Millionaire by Kirsty Shen and Bryce Leung – £0.99 on Kindle

Back to Nature: How to Love Life and How To Save It by Chris Packham – £1.99 on Kindle

China is watching you – The Atlantic

“We never had much, but we always had enough.”
– Dave Grohl, The Storyteller

Like these links? Subscribe to get them every Friday! Note this article includes affiliate links, such as from Amazon and Freetrade. We may be compensated if you pursue these offers, but that will not affect the price you pay.

Next post: Why making monthly payments on a repayment mortgage is a form of saving

Previous post: The 60/40 portfolio: what the warning signs are telling us