Are chimps making chumps out of trackers? In a trial of the fittest run by academics at Cass Business School, traditional market cap weighted indices were beaten by indices picked by 10 million monkeys (or rather by their randomly generated computer simulations).

Market cap indices are the spine of the vast majority of index trackers. News that they’re apparently taking a beating from primates therefore caused some consternation here at Monevator’s Passive Investing HQ.

So should we be pounding the earth like Charlton Heston and preparing to worship our new masters in a passive investing version of Planet of the Apes? 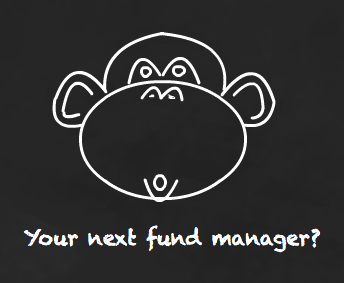 The Cass Business School’s two-part paper is called An Evaluation of Alternative Equity Indices (here’s part one and part two).

The research reveals that investment strategies with the power to capture return premiums like small cap, value and low volatility have historically delivered more OOMPH! than you got from the regular old market.

But this is no surprise. Academics have been telling us this for 20 years and we cited similar revelations a month ago on Monevator.

Broad market indices are designed to capture beta – the return of the market. But there are other sources of return out there.

Essentially, this paper shows that other types of index can angle their satellite dishes so they receive some of the beta channel, and also the small cap and value channels, too.

We’ve previously discussed how you can invest in some of those approaches – like the fundamental indices – by putting money into value-tilted passive funds.

The standard argument for market cap indices is that they are transmitters for the wisdom of the crowd.

The gestalt human investment brain allocates capital efficiently to the firms who will make best use of it, and this is reflected at light-speed in the index.

The case against market cap indices is pretty clear, too. They are passive victims of the misjudgments of the market. For instance, they are mechanically forced to accept overvalued equities that balloon in the index with the smiley face of irrational exuberance painted on.

You’ll often see passive investors challenged in heated comment threads about how their portfolios would have been swamped with Japanese equities in 1989 or tech stocks in 1999, like a council landfill site crammed with trash.

These accusations fail to account for the sheer global diversity of a passive portfolio. Nor do they acknowledge just how many active investors get trapped in expanding bubbles.

Active investors are the ones making the active decision to chase the bubble higher, after all.

There are still good reasons for holding funds that track market cap indices. It’s worth reflecting on those as an antidote to getting too clever by half:

Simplicity – Market cap indices are easy to understand. The bigger a company is relative to the rest, the greater its presence in the index. That’s it, bar common-sense rules to guard against over-concentration in the event we all go bananas and back SnakeOilSystems.com to take over the world.

One of the issues with the alternative, so-called Smart Beta indices is they are often presented in the language of a black box. Too often proprietary strategy jargon and marketing pseudo-science seems designed to lacquer on an extra layer of fees and play to our desire to believe in magic rather than to promote understanding and transparency.

Low costs – Broad market cap indices contain the most liquid equities and have low turnover which is why they can cost 0.10% to own in fund form.

Academic research rarely takes the actual cost of implementing alternative strategies into account. It deals in a frictionless world where equities can be freely traded and there isn’t a maze of middlemen to dash through.

The Cass Business School paper demonstrates that some alternative indices beat the market cap approach by around 2% per year. In the UK, you’ll be subtracting 0.3 to 0.5% from that in higher Ongoing Charge Figures (OCF) plus bid-offer spreads and any tracking error that creeps in.

Availability – We’re now served by a wide range of market cap index trackers that encompass both the weird and the wonderful.

In contrast, many of the indices cooked up in the academic labs just aren’t available as funds you can buy into in the UK.

No guarantees – Debate rages as to why the return premiums exist. Are they rewards for extra risk (in which case they should persist) or the behavioural errors of flawed humans (therefore erodible through exploitation)?

So far the return premiums have stood up to the scrutiny of the markets, but you have to be prepared for the possibility they could evaporate in the future. As Vanguard founder John Bogle says in The Little Book of Common Sense Investing:

I’m skeptical that any kind of superior performance will endure forever. (Nothing does!)

Personal risk factors – If you work for a small cap firm then a good deal of your future returns (i.e. your salary) are dependent on the fortunes of that part of the market. Tilting your portfolio in favour of small cap funds would concentrate your risks rather than diversifying them.

The same principle could apply to some extent to most of us. Consider how your earning power correlates to the economic cycle before tilting your portfolio in favour of, say, value strategies that generally take a beating during recessions.

Performance chasing – Different strategies work best in different time periods, as shown in the Cass paper. Even market cap has beaten all-comers during a raging bull market. Strategies will be declared ‘hot’ based on recent performance – witness the flurries over low volatility and high dividends recently – reducing their likelihood of outperforming in the future.

Johnny-come-latelys will swarm in, then dump the funds when they fail to make ‘em rich. As ever we must resist the temptation to jump on board a bandwagon.

Tracking error regret – How will you feel when your alternative strategy eats the market’s dust for five years straight?

When returns soar we take it as confirmation that we’re as brilliant and blessed as we always thought we were. But when our high-cost strategy is left billowing black smoke in a lay-by as the rest of the market whizzes by, how happy will we be then? That’s not a pain you’ll ever have to feel when you simply invest in the market.

Hard evidence – Twenty years is a reasonable amount of time to judge a strategy’s performance. Ten will do, five is barely acceptable. Anything less is irrelevant.

It’s hard enough to get ten years of performance data for a market cap index fund. We’ll have to wait years for useful numbers on the latest financial products.

Back-testing is used to fill the gap, but be aware that many strategies that glitter in the data mine have lost their lustre in the cold light of day. As ever, investors are wise to be cautious and wary of products with insufficient miles on the clock.

I say all the above as an investor who’s convinced by the arguments for factor investing, smart beta, fundamental indexing – whatever you want to call it.

But I know it’s a risk and so I won’t be entirely abandoning market cap investing.

Both approaches will work in tandem in my portfolio because, although I’m prepared to take a chance on the extra reward, sometimes you just can’t beat the tried-and-tested.

Next post: Day trading is too much fun to be profitable