Finally, a bit of volatility in the markets after all that tedious upward marching, and we are reminded why equities are about risk as well reward.

As blogger Josh Brown put it in the midst of the volatility: 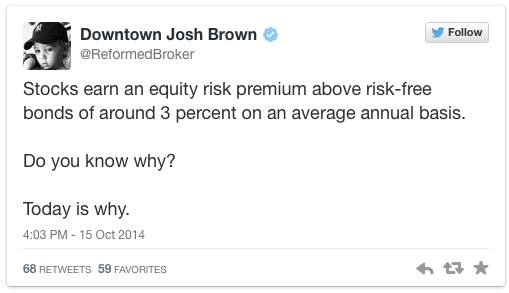 At least the 10%-ish correction has given pundits a chance to dust down their brace position mantras. I’ve selected a few below.

Most are aimed at active investors. There are rarely enough passive articles for me to squander any here – but you can find some relevant links in the Passive sections as usual.

That said, much of this stuff is behavioural, and it applies to everyone.

My advice to true passive investors would be to stick to your allocations, and ignore the movements until you come to your next scheduled rebalance.

(Oh, and remember when people were asking The Accumulator why he held around 40% in government bonds in his model portfolio, and how could he be satisfied with that supposedly dreary 6% annualized gain? This is a reminder.)

Some thoughts on the falling market

The current UK market CAPE ratio stands at 14 for what is broadly the equivalent of the FTSE All-Share using the data from Thomson Datastream.

That compares favourably to a long-run average of 19.6, although it stands someway above the 11.4 it hit at the bottom of the market slump in 2009.

..and UK Value Investor uses the same yardstick to question how much further the FTSE 100 could credibly drop:

To give you something to compare those numbers to, in 2009, when the FTSE 100 stood at 3,500 and everybody thought the financial world was about to end, the market’s CAPE was 9.5.

So assuming the CAPE approach is correct, for the FTSE 100 to reach 5,000 investors would need to be as pessimistic as they were when we were days, or even hours, from a global financial collapse.

Currently that seems a little unlikely.

Remember that that the “E” in CAPE can fall as well as the “P” – i.e. earnings would probably fall in a big global slowdown – although CAPE does smooth this out to some extent.

But for now the world is hardly ending, reports Alan Roth at AARP:

Stick to an asset allocation you can live with. Decide what proportion of your portfolio should be in stocks and stick to it, irrespective of the headlines.

The implications are simple: You have to buy stocks when they plunge and sell when they surge.

The Eight at Eight blog has some less pithy and more poetic advice that might be worth reading if you’re young and not used to volatility:

Surviving isn’t a frozen moment in time, but is in fact a continuous effort to maintain equilibrium in your mindset and in your investment approach no matter what the market conditions are. A constant reminding to yourself of the end goal as an investor. A retaining of beliefs in yourself, your methods and investment decisions.

While the similarly colourful Wexboy begins his wide-ranging recap by pointing out how trivially we shout “Fire!” nowadays:

Traditionally, a 10% market reversal was defined as a correction, while a bear market was at least a 20% decline.

But now the business media’s upped the ante, unilaterally adopting something like 3% & 10% as the new thresholds

Perhaps that’s why Patrick O’Shaughnessy at Millenial Invest is already having flashbacks from the last war:

Markets are, at their core, about emotions and how you handle them.

It is so easy to be brave from a safe distance, to say that you will be cool when the tough times come.

Those were terrifying times. I was worried to my core about my family’s future, the business, and all of our clients who had trusted us with their money.  I convinced some to stay the course, but failed more often than I succeeded.

I enjoyed these articles, but I do think the sheer volume of words – of which the articles above are just a smidgeon – in response to what’s been a modest if swift correction so far tells us more about how gentle things have been than anything much about the future.

Stay sane out there.

Product of the week: Sainsbury’s Bank is now offering personal loans of up to £35,000 reports The Guardian, way above the usual £25,000 ceiling. It’ll charge 6.9% over five years. Remember that debt is awful stuff, so only use for heart surgery or similar.

Book of the week: Obsessed with the plunging stock market? I know that dark attraction, which is why I have been trying to work on my aquariums this week. Alternately relaxing and stressful, and you have living things to care for which matter much more than wobbles in share prices. Get inspired with Nature Aquarium

by the pioneering Takashi Amano.

Next post: Low volatility – having your cake and eating it

Previous post: What if you want to invest in active funds?