Some reading for the weekend.

Anyone who still believes that markets are ultra-rational got yet another rude awakening this week, when a huge sell-off in commodities sent prices for everything from silver to oil tumbling.

In a superb column for Reuters, John Kemp writes:

Front-month Brent crude futures sank almost $12 per barrel (well over 9%) in a series of vertiginous declines that took the market down from over $120 at the start of the day to under $110.

The price change was more than 4 standard deviations — which is something that should be seen on average only once in every 63 years — if the market was well-behaved and changes followed a normal or Gaussian distribution.

At times the move has approached 5 standard deviations — which should only occur once every 7,000 years.

Yet again, the markets are proving academic theories about Gaussian returns absolutely wrong. This is why you must read The Black Swan

even though the book has become a trite buzzword, and is far less easy on the eye then the bonkers Portman movie

of the same name.

Once every 7,000 years – either investors of 20,000AD are going to find the markets a millpond, or the theories are absolutely bunk.

However, realizing that markets are not rational is not the same thing as being able to profit from it. In fact, most market timers lose money, as academic studies have shown. The difficulty, basically, is that the bubble of tomorrow is the rational re-valuation of today.

Call time on market folly too soon, and you risk missing the gains that make investing profitable over the long-term. Or, even more commonly, you fail to get back in again because you expect more falls to come.

On that score, it’s worth noting that Goldman Sachs expects this fall in oil to be temporary. Central bankers will hope the squid is wrong, given how lower oil prices would take the edge off inflation, as Stephanie Flanders points out:

If the global price of oil averages, say $110 a barrel over the next year or two, and not the $120 forecasters had been pencilling in, that could take about 0.2 percentage points off the rate of inflation in 2011 and 2012, relative to what was previously thought. If you’re the ECB or the Bank of England, or the Federal Reserve, every little helps.

The perma-bullish investors in oil companies who plague the bulletin boards (and the boardrooms of hedge funds!) will be backing Sachs over Stephanie, of course. They’ve been doing so all year, to the chagrin of those of us invested in companies that dare to do something other than dig stuff up: 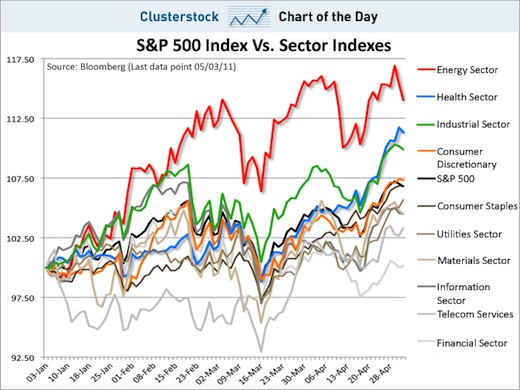 One sector to rule them all.

I am not going to predict the bursting of the commodity bubble, even if silver’s 30% price fall in a week looks suspiciously like the top (and confounds those who say the price of precious metals is driven by fundamentals).

But I think it’s worth heeding these thoughts from Larry Swedroe:

There are two […] reasons to be cautious and to avoid being caught up in the speculative hype:

Having some money in commodities as part of diversification is very sensible, if you can find a way that fits into your overall investing strategy.

But betting everything on black (or black gold!) is not.