Here’s some useful data on historical asset class returns for the US market.

The graph to the right shows US total asset class returns with income reinvested since 1925, as calculated by Barclays [2] for its Equity Gilt Study 2015.

As you can see, equities (stocks) have done much better than bonds or cash over the long-term.

Let’s now look more closely at US historical asset class returns in real terms (that is adjusted for inflation).

Source: Barclays Equity Gilt Study 2015 (Note: Where no data is available, there is a gap).

The table shows real returns, which is the annualized percentage amount by which each asset grew (or shrunk) over the period, after inflation.

Remember that inflation eats away at your savings every year.

For example, if inflation is 3% then your money needs to grow by at least 3% nominal to keep up with its impact – after-tax [7] – in order to preserve your spending power.

As the table shows, US equities have delivered returns far ahead of inflation.

As it happens US returns have also run ahead of most markets around the world.

You can see the impact of this hyper-growth for US shares in the following two pie charts from Credit Suisse.

They show how the US stock market has expanded over the past 115 years to make up a far larger share of the global total. 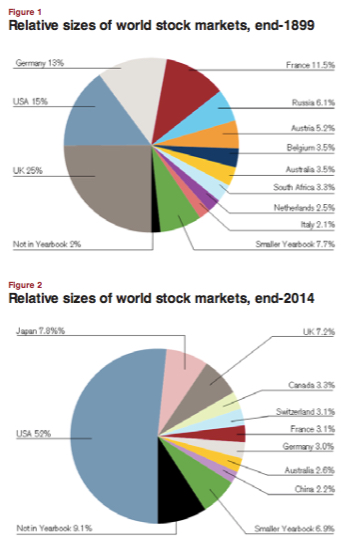 The sheer size of the US stock market means it makes up a very large percentage of any world equity [9] tracker fund.

Combine that with its traditional strong returns and the vast breadth and depth of its markets and the US is an impossible country to ignore, whether you’re a passive or an active investor.

An understanding of historical returns is important because it helps us get over behavioural quirks [10] such as recency bias.

Recency bias is the tendency we all have to think that things will continue in the same vein as they have recently, even when the long-term data says otherwise.

For instance, if you go out in a T-shirt and shorts in October in Scotland without checking the weather forecast – just because it was sunny yesterday and the day before – then you are suffering from recency bias.

(You’ll probably soon be suffering from flu, too!)

Hence it’s very misleading to consider just the last couple of years of asset class returns when deciding how to construct [11] a long-term portfolio.

Only cash and very short-term government bonds provide a secure return over a short period.

All other asset classes are too volatile [12] for that.

For example, consider the equivalent data for the US from 2010:

Source: Barclays Capital Equity Gilt Study 2010 (Note: Where no data available, there is a gap).

Shorter-term though, things are different.

Against popular expectations, 2009 was a stellar year for US stocks. Yet despite this they were still showing a negative return over 10 years of minus 2.2% in 2010, and they had been soundly beaten by less risky US government bonds.

This demonstrates how the longer-term traits of the different asset classes have reasserted themselves in the US, after that very poor ten-year period for equities.

The long and short of it

Stocks tend to outpace other asset classes over the medium to long-term precisely because they are far riskier over the short-term.

If the expected returns from equities weren’t higher than bonds, then nobody would choose to own them over less volatile and ultra-safe bonds – and the prices of stocks would accordingly fall until their expected returns rose.

That’s exactly what happened after bubbly periods for equities such as 1999 or 1929.

But while all this looks obvious in hindsight, timing the market to try to avoid booms and busts is notoriously difficult.

Nearly all the methods of stock market forecasting [13] you’ll read about have proven very unreliable, and the best method isn’t much better than that.

This means that most people trying to save and invest for the future are best advised to follow a passive investing [14] strategy, rebalancing their portfolios periodically to smooth out the booms and busts.

Over the long term – such as 40 years of investing towards retirement – the characteristics of different asset classes such as stocks, bonds, and cash should play out like they have in the past.

But don’t forget to adjust your portfolio as you age [15] and your long-term shortens!

Thanks for reading! Monevator is a simply spiffing blog about making, saving, and investing money. Please do check out some of the best articles [16] or follow our posts [17] via Facebook, Twitter, email or RSS.