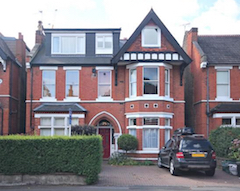 You pay stamp duty on UK property when you buy a home that costs more than £125,000.

There is no stamp duty payable if you’re the seller of the property.

Stamp duty is a transaction tax (the long name is Stamp Duty Land Tax), which you need to take into account when working out your budget for moving or buying a home for the first time.

Buying a property in Scotland? From April 2015 stamp duty is replaced by a levy called the Land and Buildings Transaction Tax.

The stamp duty rate paid by home buyers varies depending on the purchase price of the property.

There are five stamp duty rate bands. You pay stamp duty at the indicated rate on the portion of the price lying within each band.

The stamp duty rate bands are as follows:

This works out as:

Incredible! An improvement to the tax system

Under the old stamp duty system, stamp duty was payable at the highest applicable rate on the total purchase price of a property.

That was a really stupid way of doing things.

Stamp duty inevitably adds friction to the home buying process by making it much more expensive to move house, and it doesn’t do much to restrain prices.

In reality few people would do that, so house prices were distorted around the different bands by sellers trying to take into account these warping effects when setting their asking price.

The new stamp duty rates introduced in December 2014 did away with the distortions of the old ‘slab’ stamp duty system, because the higher rates are only chargeable on the portion of the property price that falls within each rate band. (It’s similar to what happens with your salary and income taxes).

In addition, the total stamp duty you’ll pay on a particular property price is lower in the vast majority of cases under the new system.

Chancellor George Osborne says you’d have to spend more than £937,000 to see your bill go up under the new system.

But put the Aldi prosecco back on ice – I’d expect any such savings in the cost of buying a home to be quickly reflected in house prices moving higher.

The main benefit of the 2014 overhaul of stamp duty will therefore be the removal of those cliff-edge distortions, which may make the market a tad more liquid, too.

That calculator also shows you what was payable under the old rules, which may be handy to know if you’re in the midst of a move.

Next post: Weekend reading: Hedge funds find it hard to be different nowadays

Previous post: How to invest in the profitability or quality factor