The risks of Exchange Traded Fund (ETF) investing have been brought into stark relief by a volley of warning shots from the G20’s Financial Stability Board (FSB), The International Monetary Fund (IMF), and the Bank for International Settlements (BIS).

While much of the alarm has centred around exotic synthetic ETFs, physical ETF risks could also be storing up a shock for the financial system, according to the FSB and IMF.

Often described as plain, vanilla funds, physical ETFs are so-called because they physically own the bulk of the securities of the index they aim to track.

The problem is what they do with those securities next.

Many physical ETFs run security lending programmes, renting out securities to hedge funds et al, who like to make short-selling mischief with them.

Securities are lent for a fee which, if we’re lucky, is split between the ETF manager and the fund shareholders (you and me).

The short-sellers get a ready supply of securities to bet against the markets and the ETF makes some easy money that can offset its tracking error.

Everybody’s happy? Everybody except the FSB which warns:

Thin margins on plain-vanilla physical ETFs create incentives for providers to engage in extensive securities lending in order to boost returns… Securities lending… may create similar counterparty and collateral risks to [those incurred by] synthetic ETFs. In addition, it could make the liquidity position of the ETF fragile, by challenging the ability of ETF providers to meet unexpected liquidity demands from investors, particularly if outflows from ETFs become significant under severe stress.

Counterparty risk – In this case the chance that you’ll never see your borrowed security again, because the borrower goes under before they give it back.

Collateral risk – The danger that the collateral the borrower posted to lend your security (to cover the counterparty risk) turns out to be worth a lot less than the value of the original security. Alternatively, perhaps you can’t get your hands on the collateral at all, due to a bankruptcy bunfight with the counterparty’s administrators.

The nightmare scenario envisaged by the BIS and FSB is that – in the midst of a market panic – doubts about counterparty viability and collateral value trigger a run on the ETF. (I explored that chain reaction more fully in last week’s synthetic ETF piece). 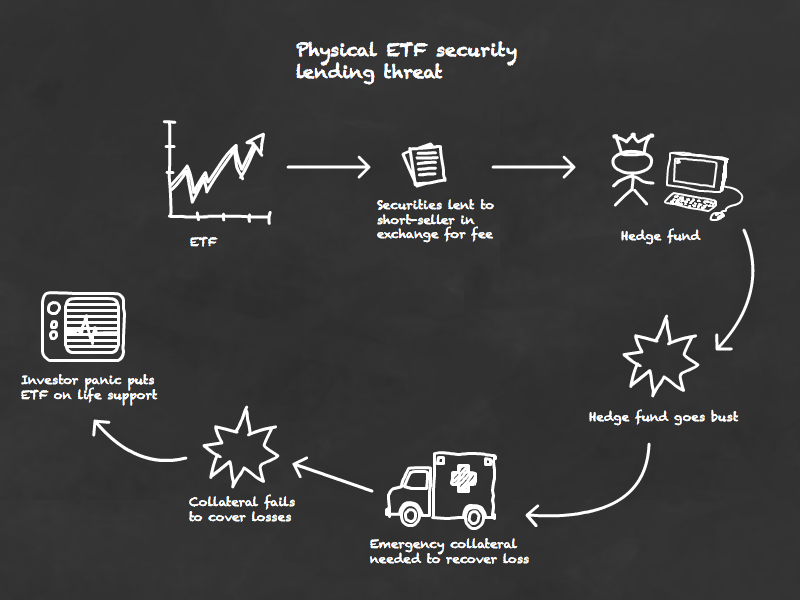 Completely avoiding physical ETFs would be an over reaction, to say the least.

The key question is are we’re compensated enough? You can only answer that question by knowing how much of the bunce is going into your pocket. I’ll return to this in a sec.

Neither do these reports suggest that their apocalyptic visions will come to pass. The authors stress that they are highlighting concerns over the unintended consequences of rampant ETF growth, the mutation of the product, and possible interactions with contemporary trading developments.

By highlighting these physical ETF risks, they’re pointing out potential weaknesses and flashpoints in the system. Flaws to be addressed now by regulators, investors and the industry, rather than by blackened survivors raking through the rubble.

It is the work of regulators keen not to be caught napping again quite so soon after the credit crunch.

What should happen next?

If the security lenders have us surrounded, then we need to know what they’re up to. And we need to be able to compare those activities in a meaningful way: Apples with apples – rotten or otherwise.

The ETF industry has barely moved a muscle on the issue so far. A fund’s factsheet and website page should contain the following information, in my view:

1. Does the ETF actually lend securities?

Not all do. You can check which iShares ETFs lend out securities on the individual fund’s page in the latest annual report (but not the interims). If no securities lending income is reported then you’re in the clear. Although that doesn’t mean that fund can’t lend in the future.

Credit Suisse’s latest semi-annual report says they didn’t indulge in any securities lending, although they’re perfectly entitled to according to their prospectus.

If you’re in any doubt about the position then contact your ETF’s provider and ask them.

2. Are we being well rewarded for the risk?

iShares split securities lending income 60:40 in favour of the investor. They dine out on 40% of the income. The other 60% takes the edge off an ETF’s costs.

What I’d like to know is would anyone else give me a 70:30 deal, or better, to compensate me for the risk that is all mine, not iShares.

The Investment Manager is entitled to retain any fee received for such [stock-lending] services for its own benefit and not for the benefit of the relevant Sub-Fund.

As we’ve seen, Credit Suisse’s ETF securities lending programme is on hold. They don’t mention what the revenue split would be if they cranked it up.

3. How much income is being generated?

I’d like to see securities lending income presented as a clear benefit to the investor. For example, what percentage did it knock off the TER?

iShares is the only provider I know of that coughs up details on security lending income for individual ETFs. As mentioned, you can find the info buried deep in the annual report (though not the interims) which reveals:

You can compare these figures with the ETF’s Net Asset Value (NAV) to work out how exposed the fund is.

It would be much more investor-friendly if iShares (and everyone else) provided the information for every ETF as per this snapshot (choose the institutional settings to view) of selected funds: 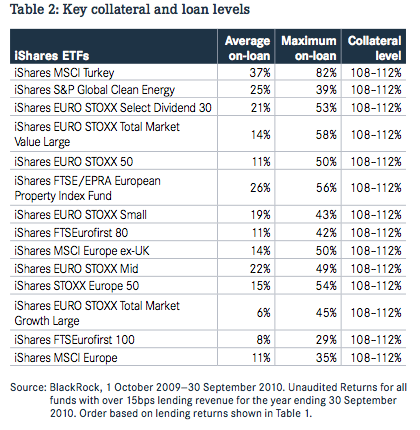 This info gives you an instant gut-feel for how hawked around the ETF is as the loans are presented as a percentage of the fund’s NAV. The average on-loan percentage is crucial, too.

We passive investors don’t want to fritter away our lives checking this stuff daily.

There’s been plenty of woolly calls for more ‘transparency’ regarding the actual collateral basket holdings of ETFs. The idea is that a rummage in the basket enables investors to perform ‘due diligence’ on their collateral risk exposure.

That’s all very well, but the information has got to be readily useable by retail investors. Too often transparency or disclosure means a provider pumping out a spreadsheet containing hundreds of listings that defy analysis by the average punter.

I’d like to see a simple rating system devised that would enable the collateral basket and the credit worthiness of counterparties to be easily assessed. Perhaps using the rating agency methodology of AAA and so on down the food chain.

No doubt this would be proclaimed expensive, but it’s not as if the ETF providers’ risk managers don’t already know what they’re getting themselves into. (I hope!)

These reporting requirements should be consistently presented for ease of comparison across providers. They should also apply equally to other UCITS funds marketed to retail investors, too. Why single out ETFs when my pension fund is merrily renting out my shares too?

My biggest fear is not that physical ETFs have suddenly become radioactive and I’ve lost my asbestos gloves. Risk abounds, so I just need to know what I’m getting myself into.

My biggest fear is that the reports prompt a raft of new regulation, or the ETF industry makes pre-emptive moves to put their house in order, but in such a way that the little guy is still left none-the-wiser.

Given that we’re all increasingly thrown onto our own mettle to provide for our future, we need the risks of investable vehicles, including physical ETF risks, to be fully understood by the average Joe.

Previous post: Weekend reading: Free your mind and your future with Free Capital