RIT is back with his roundup of the key asset class moves over the past three months. He also runs his own website, Retirement Investing Today, which has lots more data to digest.

It’s been an exciting quarter for the markets. The FTSE 100 charged out of the New Year blocks, rising 5.3% by 1 February – though by the close on 5 April that had turned into a more subdued gain of 3.7%.

I can see little justification for the increases in UK share prices if I just look at company performance, given earnings at FTSE 100 companies continued to fall. US earnings look flat, too. (Editor’s note: Remember that the stock market is forward-looking, so investors may be predicting higher earnings to come).

Interesting events in the period included:

To give the government the benefit of the doubt, the fact that the first portion of Help to Buy, the equity loans, are targeted at new builds, is possibly the government trying to encourage an increase in the UK housing stock through demand for new builds. Something we badly need in this great country – and also something clearly beneficial to new build property developers.

But I’m a glass half-empty person and so I wonder if it will also encourage a negative – sub-prime loans – that we know all too well from the US housing downturn of a few years ago.

Under both of the Help To Buy schemes, the borrower will be on the hook for 5% of the purchase price and the UK taxpayer for a further 20%, so we will have to see price falls of 25% before the banks feel any pain. Safe in this knowledge – and given that banks exist solely to make profit – will they relax their lending criteria, given they get the revenue upside but don’t carry so much risk?

Please do share any thoughts you have on this or any of the macro events of the last quarter with other Monevator readers in the comments below.

Disclaimer: I must point out that what follows is not a recommendation to buy or sell anything, and is for educational purposes only. I am just an Average Joe and I am certainly not a financial adviser.

Your first time with this data? Please refer back to the first article in this series for full details on what assets we track, and how and why.

The countries highlighted in the image (which you can click to enlarge) are the ten biggest by gross domestic product. They also represent the countries that a reader following a typical asset allocation strategy will probably direct their funds towards.

Here’s our snapshot of the state-of-play with each country: 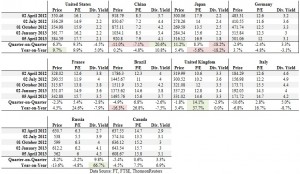 The prices shown in the table are the FTSE Global Equity Index Series for each respective country.2 The prices in the table are all in US Dollars, which enables like-for-like comparisons across the different countries without having to worry about exchange rates between them.

The Price to Earnings Ratio (P/E Ratio) and Dividend Yield for each country is as published by the Financial Times and sourced from Thomson Reuters. Note that these values relate only to a sample of stocks, albeit covering at least 75% of each country’s market capitalisation.

Remember that falling prices usually increase dividend yields. So rising yields aren’t necessarily good news for existing holders, since they most often indicate prices have fallen. A higher yield might indicate a more attractive entry point for new money, however.

To see how our ten countries are performing price wise over the longer term, we use what we call the Country Real Share Price.

This takes the FTSE Global Equity Price for each country, adjusts it for the devaluation of currency through inflation, and resets all of the respective indices to 100 at the start of 2008.

Here’s how the countries have performed over the five years since then, in inflation-adjusted terms:

The graph reveals that – in real terms – we are still in the situation where not one of the countries has seen its market reach new highs.

The US is closest at 99.3, while Italy is down even further on the quarter (or got even cheaper, if you’re a contrarian investor!) at 32.7.

Spotlight on UK and US equities

Below I show charts that detail the CAPE3, the P/E, and the real, inflation-adjusted prices for the FTSE 1004 and the S&P 5005. 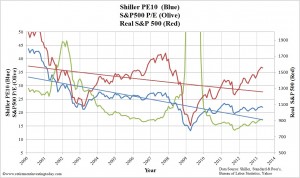 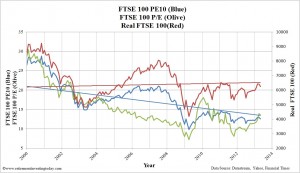 I personally use the CAPE as a valuation metric for both of these markets and use the CAPE data to make actual investment decisions from using my own money. Other traders and investors are cynical about the usefulness of the CAPE.

A house is probably the largest single purchase that most Monevator readers will ever make. It’s therefore worth looking at what is happening to prices.

In the roundup I have chosen to calculate the average of the Nationwide and Halifax house price indices, as follows:

If you are a home owner then the quarterly news is good, with prices up £2,197 or 1.4%. Of course if you’re already priced out then home ownership just moved a little further from your grasp.

I believe this latest move was largely driven by one of the other Government schemes currently running in the UK, the Funding for Lending Scheme, which has now driven average two-year real (i.e. inflation adjusted) fixed rate mortgages to negative levels. I believe house prices are driven by affordability, and that is largely influenced by mortgage rates.

Annually the news is more subdued, with prices up 0.6%.

The next house price chart shows a longer-term view of this Nationwide-Halifax average. I adjust for inflation, to show a true historically leveled view: 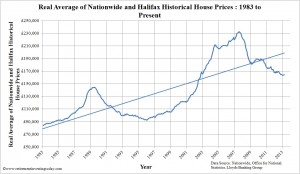 In real terms housing continues to fall, with prices back at approximately October 2002 levels.

I continue to believe the market is overvalued, although I’m sure the majority of the British public don’t necessarily agree with me. That said, I am starting to see similar views expressed in the mainstream media now and then.

The schemes prior to Help to Buy have helped make houses affordable, but this has occurred even as volumes have fallen through the floor. It will be interesting to see if Help to Buy helps transaction volumes, given that a lot of what would have been bank risk will now be transferred to the taxpayer, possibly encouraging looser lending practices.

I personally wish the UK government would stop propping up this market and enable it to adjust to the free market price. But for every one of us with this wish, there are plenty on the other side of the fence.

With that in mind, I’ve selected five commodities to regularly review. They were chosen based on them being the top five constituents of the ETF Securities All Commodities ETF, which aims to track the Dow Jones-UBS Commodity Index.6

Quarter-on-quarter we see natural gas up a large 13.4% and year-on-year an even larger 75%. I’m not surprised at this, given how natural gas prices had lagged the other commodity price increases that we track.

My preferred commodity for investment purposes is gold. It’s down 5.5% on the quarter, which has caused me to buy some more for my own rule-driven investment portfolio.

My Real Commodity Price Index looks at commodities priced in US dollars, is corrected for inflation so we can see real price changes, and resets the basket of five commodities to the start of 2000.

Even after its recent falls, gold continues to be the star performer – it’s up to an index value of 404 from 100.

On the other hand, as mentioned above, the under-performer is natural gas. It is just above par at 114.

So that’s the fourth Monevator Private Investors Market roundup. A lot of data which I hope gives a small insight into the market’s trials and tribulations over the previous quarter. As always it would be great to receive comments or thoughts below.

Finally, as I always say on my own site, please Do Your Own Research.

Check out RIT’s previous investor roundups, or for more of his analysis of stock markets, house prices, interest rates, and much more, visit his website at Retirement Investing Today.