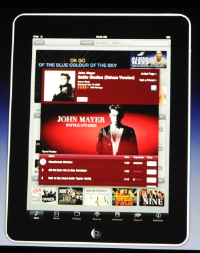 Anyone who wants to make money developing apps for the Apple iPad had better be prepared to move fast.

Like the iPhone, the iPad will enable start-ups large and small to ride on the back of a brand new platform where no rival is yet all-powerful.

I saw the evolution of the iPhone apps market close-up, due to my day job, yet by the time I actually considered making iPhone apps to generate a side income for myself, the risk versus reward balance had shifted:

The same will happen even quicker with the iPad, since iPhone apps work on the device and also many people around the world are aware of the potential market thanks to the iPhone’s success.

Below are five thoughts on getting ahead of this crowd.

If after reading you’ve got any further ideas or tips on making money developing for the iPad, please add them in the comments below!

Five tips on making money on the iPad

The development of the marketplace for iPad apps and other revenue streams won’t follow exactly the same path we saw for iPhone and iTunes.

Those pioneering digital marketplaces have set many of the ground rules, so anyone making content for the iPad already knows roughly what to expect.

Yet I do believe these established stores offer clues as to how will the opportunity to make money via the iPad will shift over time.

1. Get in early with your iPad app

If you’ve got a great idea for an app that specifically targets the iPad – using its big screen and powerful processor – don’t hang about.

Get your app written fast, and get it out there.

This is vital if you’re a one or two-man start-up, let alone a full-blown developer. The opportunity to compete toe-to-toe with bigger rivals fell away fast as competition increased on the iPhone.

This will be even more important on iPad, where you’re already competing with 140,000 iPhone apps.

Yes, there are still tiny teams making thousands of dollars every day with new apps on iPhone, but they are very much the exception to the rule. Most apps make very little, and we never hear about them.

Don’t be fooled by the rare success stories, and remember my interview with an iPhone app developer who took too long over his app and arrived third in a very niche market. Be quicker!

Apple and other established players may talk about premium priced products on the iPad, but in reality pricing power will likely fall away as quickly as it did on the iPhone.

When iPhone first launched, video games companies salivated over the opportunity to sell cheap-to-develop games for $10 to $20.

Create an app with a potential audience that’s big enough to support your product and make a decent profit at a very low price point, unless you’re product is very niche.

Some of the first iPhone app successes were Frat boy affairs that made your iPhone fart, turn into a pint of beer or become a lightsaber.

I’m pretty sure Steve Jobs wasn’t thinking about iFart when he dreamed up the iPhone, and I’m sure he has higher ideals for the iPad.

But in the first days of the iPad’s life when the device is still a novelty, so will be some of its most successful apps.

Don’t just replicate what worked on iPhone – you’re already competing with those apps, since they run on the iPad, too.

Instead, think about using iPad’s larger screen and other features, and also its living room credentials.

4. Consider advertising and other revenue streams

It took a while for the iPhone app crowd to move towards advertising, despite the fact it’s the business model that’s been shown repeatedly to work best with digital content.

If you can build your App in such a way as to deliver a compelling advertising proposition – a big audience and a decent but not intrusive ad presence – you can get on the ‘freemium’ bandwagon from day one.

This is a riskier avenue to explore than advertising, because while micro-transactions are huge in South East Asia, they’ve yet to be fully embraced in the West (although some Facebook apps have had success in squeezing money out of the model).

Of all the pre-announcement speculation, the idea the iPad was going to ease the plight of existing newspapers and magazines in the digital world was the least convincing.

iTunes has been selling digital music successfully for a decade, but you try finding someone in the record industry who says that has led to business as usual. Quite the opposite.

I sometimes still buy a newspaper because it’s so easy to read on the sofa, in the garden, or on a train.

But with the spread of truly portable readers, this near-to-last advantage of paper is diminished, too.

While I might conceivably buy a digital newspaper to read on my iPad, I’m equally likely to access free websites in the garden or on the train, and not bother with the paid-for media at all.

What does that leave as the market for the magazine industry – reading in the bath?

Next post: Rebalance your portfolio for your benefit, not the tax man’s

Previous post: An easy way to invest in Australia, Canada or South Africa