How I’m betting against Neil Woodford 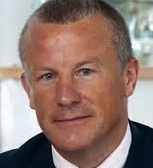 Important: What follows is not a recommendation to buy or sell The Edinburgh Investment Trust. I’m just a private investor, storing and sharing notes. Read my disclaimer.

One of the UK’s best-known fund managers, Neil Woodford, has announced he is going to leave Invesco Perpetual, his employer, in 2014. The news has prompted countless articles and bulletins from pundits mourning Woodford’s departure, recounting his exploits and opinions, and debating whether or not investors should abandon the funds he manages.

For an investing nerd it feels a bit like when Margaret Thatcher died. Perhaps that’s not entirely inappropriate given Woodford launched his Invesco Perpetual High Income Fund way back in 1988 when she was still Prime Minister.

I suspect some news desks even had ‘obituaries’ pre-written for when this day came upon us. As a sort of UK Warren Buffett – albeit our investing Donavan to America’s Bob Dylan– the financial press quotes Woodford’s every utterance and hangs on his every purchase. It even celebrates his birthday.

“What would Woodford do?” they ask.

Get sick of the whole circus and leave to start a hedge fund, maybe.

Is it a bird? Is it a super-investor?

Anyway, this isn’t primarily an article about Neil Woodford. Monevator is not really a site about following fund managers!

True, long-time readers will know that unlike my co-blogger The Accumulator, I do a lot of active investing – despite believing that most people (perhaps including me) shouldn’t.

But I almost never invest in active funds, and have never yet done so on account of their supposedly great management.

I have sometimes invested in a few family-backed investment trusts in part because I like the way they’re run. But there’s always been a more compelling thesis, too – usually a discount to net assets, or perhaps a way to access an out-of-favour asset class like private equity was a few years ago.

I think profitable stock picking is hard, but picking winning fund managers is even harder. Studies have shown past performance is generally no guide to future performance from fund managers, even though that’s how all fund fan boys pick them.

You’ve also got the problem of having to find them when they’re still young enough to do the business for you for decades. As their fame spreads and their funds swell, they increasingly suffer from institutional problems that lead to things like closet indexing.

Finally, even if your chosen one overcomes these and other problems, they still have to outperform sufficiently to beat the fees they charge – a very rare bird indeed.

Because that laundry list is so daunting, even if you’re dubious about index funds for some reason, you’d be mad to put all your money into just one active fund. It’d be a needle in a haystack!

So you’d have to diversify between a few active funds, and at this point even if you’ve got some unquantifiable knack for spotting talent, the one or two inevitable duds are going to depress your returns.

At that point you might as well have invested via tracker funds all along, with the certain knowledge that fees would be low and your returns would follow the market.

Really that’s all most people want and need from their investing.

You’ll notice that what I’ve written is different from saying: “I don’t think anyone can beat the market”.

I don’t think the market is completely efficient, personally, and I believe there’s sufficient evidence that some very small number of people can beat it. But it’s overwhelmingly unlikely you or I are one of them, and I think it’s even less likely you’re going to find half a dozen worth paying to do so for your investing lifetime.

I happen to believe Neil Woodford has as good a claim as any active investor to have potentially proven he has some market-beating prowess. Diehards will say this graph from Hargreaves Lansdown to celebrate his 25-year anniversary back in February attests to two and a half decades of luck and being in the right place at the right time… 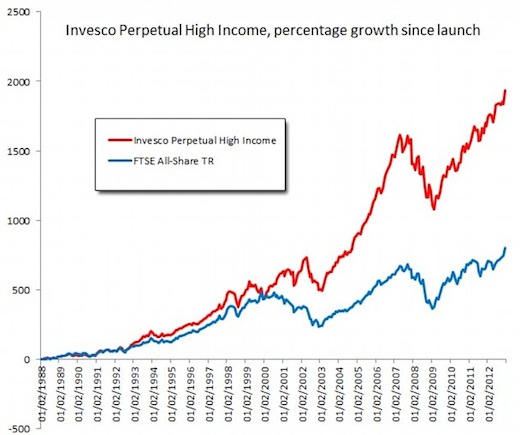 This graph (from Hargreaves Lansdown) shows how Woodford has delivered.

Some scant few of us are touched by the gods of fortune, but you surely don’t want to gamble your retirement on it.

Run for the hills!

What’s interesting to me about Neil Woodford right now isn’t so much whether he can beat the market, but that so many people believe he can.

As a result, when he announced he was going to leaving his job next year, some of his investors began leaving his funds in sympathy.

This could be a big problem for his employer – the High Income fund mentioned above has nearly £14 billion in it, and that’s just one part of the roughly £30 billion empire that Woodford runs for Invesco. If investors desert these funds then the funds will shrink, reducing fees to the company.

It’s also a problem for those fleeing investors. Where do they put their money? Presumably with another equity income fund, but which? Your guess is as good as mine, as an expert quoted in the press – and as theirs for that matter.

What Woodford’s departure isn’t a problem for – in the short-term – is The Edinburgh Investment Trust (Ticker: EDIN), an income investment trust he has managed for the past few years.

Investors in this stock market listed trust started dumping it as soon as the news of his imminent offski-ing broke.

But investment trusts are closed-ended – there are a fixed number of shares in circulation, and their price is set by supply and demand. As scared investors sold their shares, no liquidation of assets took place. The shares simply changed hands at markedly lower prices:

The Edinburgh Investment Trust’s share price: Can you guess when the news broke?

What’s interesting here is that the price fell as much as 10%, but the holdings of the Edinburgh Investment Trust – and so what the shares are theoretically worth – hadn’t necessarily changed at all.

Instead, shares in the trust moved from being priced at a 5% premium to assets to a small discount. (Read that and my other articles on investment trusts for more on discounts and premiums).

In other words, a chunk of Edinburgh holders decided they no longer wanted to own what the trust owned, on the grounds the man in charge of picking stocks for it would probably be gone in six months time.

In the press they dubbed this “investors abandoning the fund in droves”.

But with an investment trust – because it trades via shares on the stock market like any other listed company – you could just as well write “investors bought cheaper shares in the fund in droves”, since for every share sold there is a buyer.

Who were those buyers?

People like me, I suspect, who sniffed an opportunity.

A Monevator reader told me in the week that the Edinburgh sell-off was why he never bought investment trusts. He wasn’t prepared to see the value of his investment fluctuate according to other investors’ whims.

I can see his point of view, but in this case I took the opposite one. I think investors’ whims have provided my opportunity here.

Unless you’re the editor of What Investment Trust? magazine, I’d wager you do not.

I haven’t got the foggiest, either. Yet all these trusts sell at a premium to their net assets – undoubtedly due to the hunt for yield in recent years.

Sure, a few income investment trusts are on a discount, but my point is it’s clearly possible to run an income trust and be well-regarded enough for investors to pay more for shares in your trust than the value of its assets, even if your name is not “Neil Woodford”.

And my bet – and the reason I bought the shares after the sell-off – is I believe the same will likely be true of the Edinburgh trust some time in the future.

In fact, I wouldn’t be surprised if the premium even comes back before Woodford has left in April!

There’s a chance that the board of directors that appoints the manager to Edinburgh will offer its management back to Woodford when he’s set up his new company, presuming he wants the gig.

If not, then his successor at Invesco, Mark Barnett, seems to be cut from the same sort of cloth. The trusts he manages are doing well right now, and the blue chip income variety (Perpetual Income and Growth) is, like most, on a premium.

But it’s also likely some investors wary of the premium on income in the past year or two will buy the Edinburgh trust simply because it now offers a higher yield, due to the discount, on the same asset base. That makes the trust a better buy for income than before the Woodford wobble, ironically enough, though I don’t suppose those selling saw it that way.

Anyhow, the following graph shows the gap that opened up between Edinburgh and its rival City of London trust on news of his departure, and how that gap is already closing:

Edinburgh (blue) has already bounced off its post-news low, and I think will eventually mirror City of London (red) again

I plan to sell as it narrows further, or if the premium returns.

This week Eugene Fama was one of three recipients for the Nobel Prize for economics, on account of his work on the efficient market hypothesis.

Perhaps Neil Woodford should be in line for a Nobel Prize next year, for proving that thousands of his investors couldn’t care less.

Me? I just want to make a bit of profit.

Previous post: How to work out your own financial independence plan