Tracking error – how it affects FTSE All Share funds

Update: There are some concerns about the reliability or our reading of the data source we’ve used to compile this feature, which it’s being suggested does not always take account of dividends in its returns. We have modified this copy to reflect this, and will investigate further.

Despite claims that the Total Expense Ratio (TER)1 is the best predictor of returns from passive index funds, it often only does half a job when pinpointing the real costs of a tracker.

Just as nature selects for big brains, sharp teeth, and the ability to waggle your dangly bits in an amusing fashion, smart passive investors look for low tracking error as a highly desirable trait when choosing the fittest index funds in the investment jungle.

But reliable tracking error data is devilishly hard to find. And summoning the will to trawl the internet can be harder still for investors of the couch potato kind. 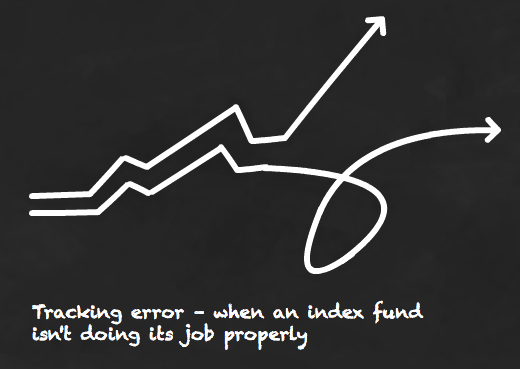 Help is at hand

Never fear, the alarm has been sounded. Monevator’s sleeper agents have once again been activated and prodded into action to fill the yawning gaps on the ‘to do’ lists of Britain’s passive investors.

Our plan this time is to host a regular performance review of the main FTSE All Share trackers versus their index.

Hopefully this survey will:

The following table shows the returns from a variety of All Share index tracker funds, plus the index itself, marked in blue.

I’ve ranked the entries by order of their 3-year returns. Funds placed higher than the All Share index returned slightly more than it over three years. Funds placed below it lagged the returns from the index over that period.

The tracking error calculation is simple. Just subtract the fund’s performance figure from the return of the index. (Some call this tracking difference).

For example, the tracking error figure for the M&G Index Tracker A fund over one year is:

There are a few technicalities to note if you want a fully rounded picture of what I’m doing to get my table. (This section is eminently skippable if you just want to get straight to the point).

The most important point this table makes is that time is a great leveller. The chart-topping DFA fund shoots the lights out over one year, but over five it’s settling back into the pack. Which is especially important to know as you have to pay expensive advisor fees to access DFA funds.

The same goes for the Edinburgh Tracker Trust that’s in a photo-finish with the index over five years but is deeply average over ten. If this fund was on my hotlist then my next step would be to find out whether its TER had been slashed, which may account for its recent rocketry, or whether there is some peculiarity in its index replication recipe.

On the face of it the stark underperformer amongst this lot is the db-X tracker ETF, though its OCF is reasonably competitive. (Update: This may be due to inaccurate or misread source data. We’re looking into this).

The Virgin tracker looks nowhere near as bad as its market-lagging OCF would suggest. Fidelity has a headline grabbing 0.3% charge but has somehow conspired to underperform Virgin’s 1% fund over the last three years.

Over ten years the best-performing fund we have data for is the M&G Index Tracker. Although, in the last three years it’s fallen behind the HSBC fund which aggressively cut its price in 2009 to combat Vanguard.

Intriguingly, Vanguard is flattered by a tracking error comparison because it charges a 0.5% initial fee to cover stamp duty. That means stamp duty doesn’t swell Vanguard’s tracking error whereas the other funds excrete the share-dealing tax directly via this route.

You can account for all these nuances by squaring up your favourite funds against each other using a fund cost comparison calculator. Use your tracking error figures as the annual charge to find out the real cost of the fund.

Perfect is the enemy of good

Over 10 years I wouldn’t worry about the differences between the funds in the table we have data for. The gap between top and bottom is a piffling 0.3%.

But I’d want to avoid the gulf that’s opened up between a very poorly performing fund and the top funds over five years. I’d worry that a fund that can miss its benchmark by over 4% isn’t doing its job properly, and would dig deeper into the data to try to find an explanation.

Avoiding a straggly bottom shouldn’t find its mirror in an obsession to own the top. Don’t waste time hunting down the very best fund and then lash yourself with the cat if it doesn’t ‘win’ one year.

Look for a fund that habitually hugs its index tight, has a low OCF, and check that its tracking error is reasonably low and consistent with its peer group over as many years as possible. That should do you nicely.

Next post: Weekend reading: Congratulations if you stayed the course with shares

Previous post: Weekend reading: Why the rich should not give money to charity