Everybody hates taxes, especially the obscure, stealthy kind that you didn’t even know you were liable for. Enter off-shore funds1 – including many ETFs and index funds – that are subject to a weird and not-so-wonderful tax regime that could land you with a nasty tax bill.

The headline is that if you own an off-shore fund that isn’t either:

Then any capital gain you make on that fund is taxed as income rather than capital gains, when you sell.

The upshot is that if you’re paying capital gains at income tax rates then you could be in for a tax bombshell that completely destroys the point of investing in low cost funds.

How do I avoid paying income tax on capital gains? 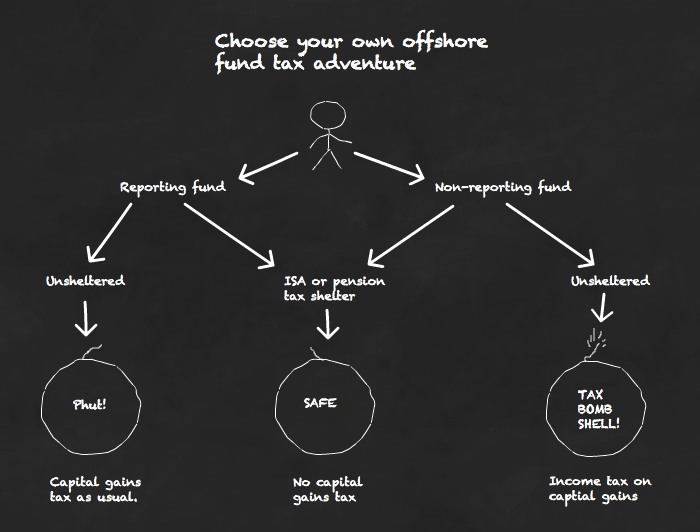 If you’ve bought funds listed abroad, then you probably do own non-reporting or non-distributing funds.

Funds must apply to HMRC for reporting / distributing fund status. But vehicles intended for the US or other foreign investor markets are unlikely to have qualified. Why would they bother with the administrative costs if the funds aren’t aimed at UK investors?

You will be liable for income tax on capital gains in such cases – although only when you sell, and if they’re not tax sheltered.

Where does my fund hide its status?

The key info might be buried anywhere, depending on the product provider’s whim.

Scroll down to the Distributing Funds and Reporting Funds sections. You’ll need to download the relevant spreadsheets, then search by company name or the fund’s ISIN number using Excel’s Find function.

If you’re not sure about your fund’s status then contact the product provider and ask.

Can reporting / distributor status be revoked?

It’s entirely possible for a fund to lose its reporting status, though not as likely as it used to be when distributor status was the only option. As HMRC say, in their highly entertaining 209-page manual:

A fund, once granted reporting fund status, may rely on that status going forward subject to continued compliance with the reporting funds rules, which include making reports as described above for each period of account. A fund may exit the reporting funds regime on giving notice and there are rules that permit HMRC to exclude a fund from the regime for serious breaches or a number of minor breaches, subject to an appeals process.

So it could happen, but it would be suicidal for any index tracker to fall foul of the rules, which were designed to increase the attractiveness of the UK investment market, after all.

It’s also worth noting that reporting fund status is replacing the older distributor fund designation. Currently we’re in a strange either/or transitional phase. Distributor status should have been entirely swept away by mid-2012.

For our purposes, it doesn’t matter whether a fund has reporting or distributor status, as long as it has one of them.

Ignorance is no excuse

If you’ve inaccurately filed your tax return, blissfully unaware of the implications of the offshore tax regime, then HMRC are going to want any outstanding tax back with interest. And it could tag on an inaccuracy penalty, too, if it judges you filled in your form without due care and attention.

As a passive investor, my solution is simple. Avoid non-reporting funds like ebola-carrying monkeys, unless you can hide them away in an ISA or pension.

Next post: Ten ways to stop inflation destroying your wealth