Now here’s a thing. Every time I launch into an explanation of how – and why – I’m transitioning my largest SIPP into an income-producing vehicle based around income-centric investment trusts, Monevator readers pop up in the comments box to tell me that I shouldn’t.

Better by far, they say, to opt for an income-focused passive ETF.

Available for a cost of just a few basis points, they argue, such ETFs are much cheaper than an open-ended fund or closed-end investment trust.

In vain does our esteemed proprietor, The Investor, try to turn the discussion back to the topic in hand – which last time round, was on the individual merits of some of the income-centric investment trusts that I’ve been considering.

But no: the relentless tide of passive ETF-huggers remorselessly advances its views, steamrollering everything – even The Investor – in its path. 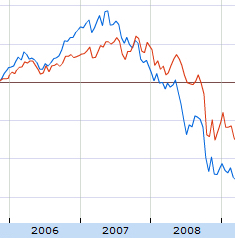 What we see is clear enough. Investment A initially outperforms Investment B from its late 2005 starting point, but then does much worse. By the time the stock market reached its nadir and started to climb back upwards, in March 2009, a significant gap had opened up between Investment A and Investment B.

And although the righthand y-axis has been excised in the interests of a cheap authorial dramatic trick, the difference in performance between the two investments at this point – as you’ll see in a moment – is equivalent to around 20 percentage points.

In fact, by March 2009 our holding in Investment A is something like 45% underwater.

Next, with a conjuror’s flourish, let’s attach the correct labels to our two investments, and also show the performance to date.

Now let’s take a look at the full chart, extended to take us up to the present:

IUKD is still underwater, almost ten years after its November 2005 launch, while the FTSE is up 23%.

The gap between the two is 25 percentage points – hardly a nominal tracking error.

Far from a rising income stream

From an income perspective, IUKD has also disappointed.

After a strong start, during which the ETF bought into a whole host of Icarus-emulating soon-to-be stock market dogs (think Royal Bank of Scotland, Lloyds, Northern Rock et al) income payments from IUKD plunged downwards just like the share price.

In other words, six years later, income was still 28% below 2006’s distribution – and that was its best performance since 2008! 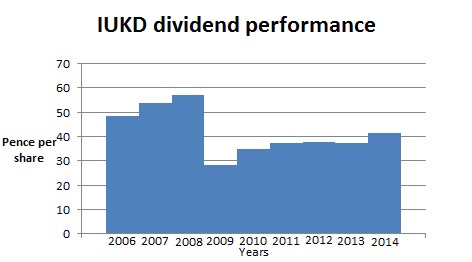 That’s hardly the kind of steady income-generating performance that an income-seeking retiree wants.

For the sake of the uninitiated, I should stress again there are in contrast many UK equity income trusts with multiple decade histories of delivering a rising income.

For instance, here is the dividend payout record of one such fund, the City of London Investment Trust (Ticker: CTY): 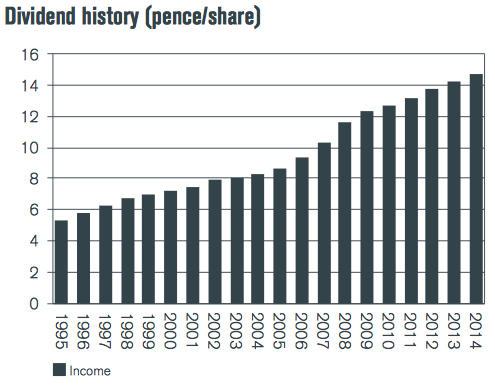 Remember, this investment trust went through exactly the same bear market as the IUKD ETF – yet it managed to keep on raising its dividend throughout.

While that’s no guarantee it or any other income trust will always be able to perform as well – income-wise – when markets turn tricky, it seems a fairly convincing performance under fire.

Show me the proof

By now, it should be fairly clear why I prefer an actively-managed investment trust to at least one passive income-focused ETF – namely the original iShares UK Dividend ETF.

And yet, you might reasonably ask, why I am so insistent on generalising that disdain so as to include all passive income-focused ETFs?

First, while there is a considerable body of (admittedly much-debated) argument and evidence as to the outperformance of passive products in terms of capital growth, I am aware of no such equivalent argument or evidence when it comes to income-focused passive products.

Let me repeat that: for income, there is no theoretical underpinning that says passive should be better.

But better—in terms of a larger and more sustainable income flow?

Maybe you are aware of such a theoretical underpinning—and if so, please enlighten us all, via the comment box below.

But – as far as I’m aware – there’s no a priori reason for assuming that they should. Unlike capital-focused passive products.

And that’s not all.

To my mind, I find my second reason for distrusting one’s retirement to a passive product to be just as persuasive.

And it’s this: All passive products follow an index. In the case of income-focused ETFs, that index has to be constructed so as to offer a rising and sustainable dividend.

But how, exactly? The approach taken by IUKD didn’t work.

And while products tracking the FTSE UK Equity Income Index, the FTSE UK Dividend+ Index, or the S&P UK High Yield Dividend Aristocrats Index might be able to point to a different selection regime, it’s still all down to a computer rigidly following a laid-down formula based on what has worked in the past.

Rules that can be remarkably restrictive.

Here’s the description of the FTSE UK Dividend+ Index, for instance:

“The FTSE UK Dividend+ Index selects the top 50 stocks by one‑year forecast dividend yield, and the constituents’ weightings within the index are determined by their dividend yield as opposed to market capitalisation.”

“the performance of the 30 highest dividend‑yielding UK companies within the S&P Europe Broad Market Index, as determined in accordance with the Index methodology, that have followed a managed dividends policy of increasing or stable dividends for at least 10 consecutive years.”

Granted, there can be safety nets put in place, so as to avoid an over-concentration in a particular sector, for instance.

But that isn’t really the point.

The past is no guide to the future

The point is that a computer that is slavishly following an index will blindly buy and sell stocks in accordance with those index rules.

It will do this irrespective of future income prospects, because it only knows about past income performance.

So in theory, there’s nothing to repeat a re-occurrence of what happened with IUKD.

And as someone who wants to enjoy a comfortable retirement, I prefer forward-looking active income-focused management, to backwards-looking passive income optimism!

Catch up on all the The Greybeard’s articles on deaccumulation.