A warning signal from dividends (and why it doesn’t matter) 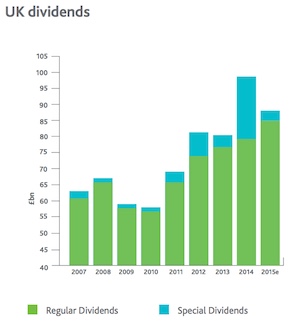 I read an article on dividend growth in the US, and asked an income fund manager contact for his view from a UK perspective, which follows. (He’s ended up posting anonymously to save all the bother of not doing so.)

Capita has just published its latest analysis of the dividends that have been paid out by UK companies.

It found that third quarter dividend payments were at a record high.

See Capita’s graph, above right, and note it’s the green bars that show how regular dividends have grown.

Capita also warns, however, that the growth of distributions is slowing, and that dividend cover is shrinking.

Many people put a lot of faith in dividends and rightly so, but that should not mean our love is blind.

Dividends, like lots of numbers in finance, are both a target and a measure. They provide income and, if reinvested, contribute to capital growth.

They can also tell us how healthy – or not – companies are.

The graph below (derived from Bloomberg’s collation of forecasts from analysts) shows the amount of cash that UK companies expect to pay out as dividends one year ahead (excluding special dividends) relative to a UK market capitalization-weighted index: 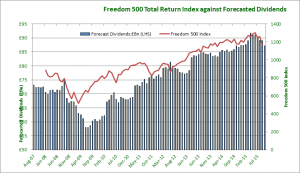 One is the sickening lurch downwards in 2009. This came as the big UK banks discovered that they hadn’t actually earned any money from all their clever traders, PPI salesmen, and borrowers, and so could not pay it out as dividends.

The second feature is the overall rise in distributions since the trough of 2009 to the peak earlier this year.

The desire for yield is a powerful motivation in a near-zero interest rate world.

Recently, however, the trend is downwards.

Expectations are that dividends next year will be about £87 billion, notably lower than the £91.7 billion predicted as recently as April.

There have been some high profile cuts already, the two biggest being Standard Chartered and Glencore.

We learned last year that Tesco would cut its payments, too.

On top of that there is a background of profit warnings from a lots of smaller companies that have been hit by lower growth rates in China, a slightly stronger pound, and what’s simply a super competitive environment in the UK where the lack of inflation makes it difficult to raise prices and margins.

Every data analyst knows that correlation is not causation.

Nevertheless, if the market had not risen as dividends did, its yield would be 50% greater than the current figure of 3.7%. That would make it even more attractive against gilts yielding less than 2%.

This suggests the increase we’ve seen in capital values has been warranted.

Everyone likes the warm feeling generated by rising capital values but we should not ignore the slower, tortoise-like returns from reinvesting dividends.

What we really don’t like is a sudden suspension as happened with Tesco, where investors faced the double whammy of falling capital values and lower income.

At least the slow motion car crash in the commodity sector has been a warning to investors that its dividends were under threat.

When Glencore succumbed to the inevitable, its cut and associated fund raising was not a total surprise. A yield of 11% on Anglo American indicates investors have similar fears there, too.

There are doubtless many more companies where directors are maintaining distributions in the hope that this positive ‘signal’ overwhelms the few nerds who actually look at the cash flow statement and question dividend sustainability.

The Financial Times quotes the current dividend cover for the FTSE All-Share Index at 1.59 but I don’t have a figure for the projected dividend cover.

Even if I did I probably wouldn’t believe it because so many executives are remunerated with share options based on adjusted earnings per share figures.

In my opinion, these are fantasy figures to make bosses richer.

Dividends, by contrast, are real numbers backed by cash, to makes shareholder richer.

That is why they tend to rise more slowly.

No need to panic

Does that mean sell?

Not to it doesn’t. But it does mean we have probably reached the end of this business cycle.

So what? Another one will start soon and the process can begin all over again. Then the question will be when to buy.

Why risk getting two decisions wrong when the alternative is to sit tight, stay invested, and let those dividends you still receive after the cuts do the heavy lifting by reinvesting your income through the bottom of the cycle?

That way you will be fully invested at the start of the next upturn.