It’s become fashionable to rate ISAs ahead of SIPPs as the best place for your retirement savings. Many investors even talk about abandoning personal pensions altogether if that sinister man [1] in 11 Downing Street messes with them one more time.

While this might make for fine, contrarian pub talk – and if you find the pub where they banter about personal finance all night long then please point me to it – in my opinion the vast majority of people are better off storing their retirement funds in a proper pension scheme.1 [2]

ISAs and personal pensions both shelter assets from tax on interest, dividends [3] and capital gains – so far, so equal [4].

But pensions have the edge where tax relief meets tax bands (bear with me).

If you paid 20% tax on all your income then at first blush it wouldn’t make any difference [4] whether you put your money into an ISA or a pension – they would both receive the same tax holiday.

But part of your income is likely to fall into lower rates of income tax when you retire, in contrast to your earnings when employed.

In other words, a 40% tax-payer can earn 40% tax relief on pension contributions now but may only be taxed at 20% or even 0% when they retire.

A 20% tax-payer is likely to earn 20% tax relief on pension contributions, but a fair wedge of their retirement income may well fall within the personal allowance 0% band.

That means overall they’ll enjoy a 20% boost on their assets that is unmatched by ISAs.

In contrast you’ve already lost 20-45% to income tax on your ISA contributions, before you get the money in there.

The best that can happen is that you don’t lose any more when you pull it out again. 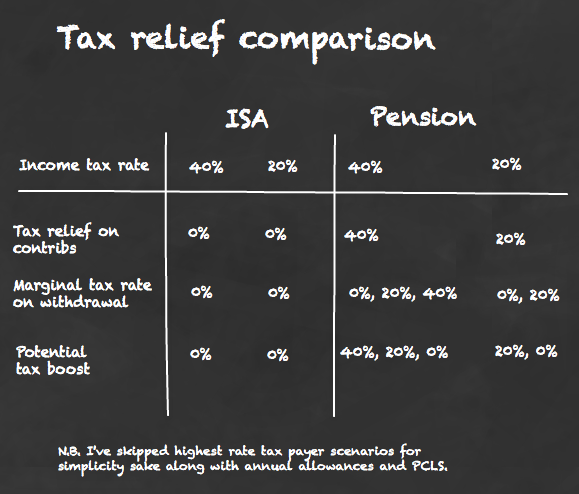 Choosing a pension over an ISA can make a large difference to the size of your retirement stash as illustrated by the following example.

Imagine Irene Isa pops £8,000 into her ISA every year while Sally Sipp drops the same amount into her personal pension.

Sally and Irene’s investments both grow at an annual compound rate of 4% over the next 20 years.

The difference is due to the 20% tax relief.

Now they come to draw money from their pension. If Sally’s entire SIPP income was taxed at 20% then it would be the same as Irene’s ISA income.

But Sally doesn’t suffer 20% tax on the entire amount…

Irene ISA’s annual income is £9,820 assuming a withdrawal rate of 4%. She isn’t taxed on any of it as she’s withdrawing money from an ISA.

Sally SIPP’s gross annual income is £12,275. Most of that income comes in under her annual personal allowance [7], which is £10,500 at the time of writing. She is only taxed on the relatively small portion of her income above this limit.

So Sally’s net income is 21% larger than Irene’s.

Now I haven’t factored in the State Pension into those calculations because Sally and Irene retired age 55. A State Pension will push you closer to a higher tax band, so if you aren’t planning on retiring until your late 60s then the advantage of pension schemes over ISAs is reduced, although not eliminated.

Also remember that the tax benefits are doubled if you’re part of a couple that maximises your personal allowances and pension schemes.

Finally, there’s the 25% you can withdraw from your pension tax-free.

This is a straight ace from your pension scheme. You can withdraw 25% of the whole pot and pay no tax whatsoever on that sum when you reach the minimum pension age.

Again, you’ve just made a 20-45% gain above and beyond anything you can achieve with the same investments in an ISA.

That’s not to be sniffed at.

To be fair, you can recycle savings from an ISA into a pension, too, but the point is that it’s only pension schemes that offer the 25% tax-free lump sum.

Note, this doesn’t work if you exceed your lifetime allowance or you’re over 75 or if you try to recycle using your 25% tax-free windfall.

The tax shield surrounding your ISA only remains intact if you pass it on to your spouse or civil partner.

Any other beneficiary (for example, the kids if you were divorced) doesn’t benefit from tax-free income and capital gains on the ISA portion of your savings when you exit the stage.

Your ISA holdings would fall into your estate in that instance5 [10] so 40% inheritance tax will be due on any part of your wealth over and above your allowance (usually £325,000) including your house and all other assets.

The situation is much more favourable for pensions although it partly depends on the individual details [11] of your scheme.

Most pensions aren’t liable for inheritance tax and aren’t taxed at all if you die before age 75 no matter who your beneficiary is. If you shuffle off after 75 then the chances are that your remaining pension will only be taxed at your beneficiaries’ marginal income tax rate.

Check out this superb ‘in a nutshell’ table [12] for the full tax rundown.

Most people are aware that they should stash enough into their workplace pension to get the company’s maximum match.

It’s a double-your-money game. For example with some schemes you can put in, say, 5% of your salary to get another 5% from your company. To turn down this opportunity is to turn down free dosh.

What’s less well known is that you also avoid national insurance if your company scheme operates on a salary sacrifice basis.

National insurance is a hefty 12% loss for basic-rate taxpayers so tax relief is effectively 32% in a salary sacrifice scheme versus an ISA. Meanwhile, higher-rate payers take a 2% NI nip and so can earn tax relief of 42%.

You will save national insurance on any amount that you divert into a salary sacrifice scheme. You don’t have to stop once you’ve maxed out the company’s match.

We’re wandering into the weeds now but you can’t keep putting money into ISAs if you move abroad, unless you are a Crown employee.6 [13]

But you can keep up your pension contributions from overseas under a wider range of circumstances. (The fiddly details are beyond the scope of this post.)

Also, if you fall upon hard times, ISA assets will affect most mean-tested benefits whereas pre-retirement pensions will not.

Accessing your money whenever you damn well please is the inarguable advantage that ISAs have over SIPPs and other forms of pension scheme.

That makes an ISA ideal for all financial objectives short of retirement at the minimum pension age.

Extreme [14] early retirement, mortgages, university fees, emergency funds and so on – I would definitely use an ISA to meet any of these goals.

But it’s a combination of SIPP (or stakeholder pension) and workplace pension all the way if you want to hit retirement at age 55 or beyond.

The very flexibility of an ISA is a risk in itself when saving for a long-term goal like retirement.

Can you be sure you’ll resist dipping into your funds to relieve some emergency or overwhelming desire along the way?

The temptation is ever present and can set back your retirement by years.

The recent changes to pensions [15] make your pension just as flexible as an ISA when you finally come to generate an income, although that also means there’s some risk of foolish cash splashage by newly minted retirees who don’t know what they’re doing.

Finally, some argue that ISAs are less prone to regulatory meddling than pensions. Historically that’s certainly been the case.

Even now, the current Government is consulting on pushing back the minimum age for private pensions from 55 to 57 by 2028. The plan would then be to peg the private pension age to the State Pension age so that there’s always a 10-year gap between the pair.

Moreover, 40% tax relief is favourite for the chop no matter who wins the next election.

But to my mind neither development destroys the superiority of the personal pension over the ISA when it comes to drafting you towards retirement.

Mix and match your cash

Some like to hedge their bets by investing in ISAs and SIPPs.

A hybrid solution could be just the ticket if you want to retire before the minimum pension age. You could use ISA assets to cover you for a few years before switching to your pension.

But before you decide, work out your financial plan [16] and calculate when you’re likely to retire. If that date is beyond the minimum pension age then you will probably be better off with a pension scheme.

Note: This post on pensions versus ISAs was updated in April 2015. Some reader comments below may refer to earlier rules and regulations.

Thanks for reading! Monevator is a simply spiffing blog about making, saving, and investing money. Please do check out some of the best articles [17] or follow our posts [18] via Facebook, Twitter, email or RSS.