A decade ago I wrote about investing for 100-year olds [1]. I wondered how we should work, save, invest – even have children or time our retirements – given ever-rising longevity?

If kids born in the developed world in the early years of 21st Century could expect to see the 22nd, what would that do for their investment time horizon?

Interesting questions – but my article proved to be a masterly example of the perils of market timing.

Talk about being suckered in at the top.

Pundits dutifully penned gloomy pieces bemoaning how younger Britons would not live as long lives as their elders. But actually, it’s not quite so clear.

If you look at the trend over time in those figures, both male and female life expectancies rose slowly until about 2014, and they haven’t discernibly changed since.

On the other hand, the UK pension industry cut life expectancy forecasts by six months [4] in 2019.

Some researchers such as those at The King’s Fund [5] expect Covid-19 to further depress longevity forecasts:

The scale of excess mortality associated with Covid-19 thus far, and evidence that many lives have been cut short (for example almost 11% of Covid-19 deaths were among people aged under 65 years), is unprecedented in recent decades.

The wider socio-economic impacts of the pandemic could also have an adverse impact on health and mortality overall.

They state the influence that the pandemic will have on life expectancy in 2020 will become clear in due course.

Even leaving aside the recent choppiness in the prognosis for longevity, it’s clear that in the UK the most dramatic advances happened long ago.

To quote those same researchers:

Males born in 1841 could expect to live to only 40.2 years and females to 42.2 years, mainly because of high mortality rates in infancy and childhood.

Improvements in nutrition, hygiene, housing, sanitation, control of infectious diseases and other public health measures reduced mortality rates, increasing life expectancy to 55 years for males and 59 years for females by 1920.

That’s a big leap by the early 20th Century. Compare though the 1841 figures with life expectancy in the year 2000. By then newly-born girls could expect to live until their 80s, and men hope to see their late 70s.

Perhaps it’s no surprise if there’s some frustration with this century’s more erratic advances: 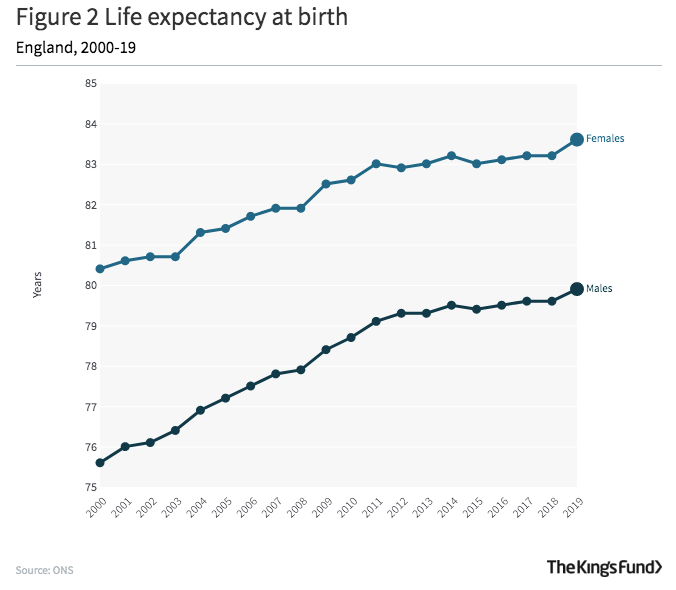 Looking at this graph, you might infer that life expectancy advances have slowed to a crawl.1 [7]

However it’s not as if there’s been no progress. (I’m sure most people who got an extra three years wouldn’t have wanted to give them back…)

But clued-up Monevator readers with the wherewithal to gaze ahead 40 years and to save towards it – keeping fit [8] en-route – probably have more to look forward to.

Want more? My co-blogger The Accumulator wrote a great post [9] on how to think about your personal life expectancy (and another one for couples [10]).

Who wants to live forever?

What if the big advances in life expectancy aren’t over? Not just in terms of how long you live – but how long you will stay healthy?

Imagine if you lived until your 150th birthday, and you were still very active at 140.

What would that do to how you work, save, spend, and invest?

…unless you’re a yeast cell, a modified mouse, or even a primate that has taken part in one of the various longevity research [12] projects making waves around the world.

In that case certain supplements, eating protocols, and gene-related therapies may have already increased your lifespan by 20-50%.

My interest in this was piqued by my girlfriend, who told me on our first date that she planned to live until 150.

“Go on a few more dates with me and it’ll certainly feel that way,” I said.

Morbid banter aside, she also pointed me towards the work of Harvard Medical School biologist David Sinclair and his 2019 book Lifespan [13].

Sinclair believes we should treat aging as a disease to be cured, rather than an immutable law of nature.

In Lifespan [13] he introduces the ‘information theory of ageing’. The idea is that instability in an organism – grey hair, wrinkly skin, cancer, ageing – amasses over time due to the loss of the organism’s ability to repair genetic damage.

The authors begin by seeking to characterize how professionals view the hallmarks of aging, including genomic instability caused by DNA damage; alterations to the epigenome [15] that controls which genes are turned on and off; loss of healthy protein maintenance, known as proteostasis; exhaustion of stem cells; and the production of inflammatory molecules.

“Address one of these, and you can slow down aging,” the authors argue.

“Address all of them, and you might not age.”

I was skeptical when I began the book. Sinclair is a persuasive evangelist, and he largely won me over. I was already an intermittent faster and a firm believer in exercise, as I shared [8] on Monevator years ago. I’m now looking into other anti-ageing hacks cited by Sinclair, such as resveratrol and metformin.

I already think we’re at the start of a transition towards self-directed health – soon to be better informed by genetic testing – that will further widen the gap between the healthy and unhealthy.

For instance, I subscribe to the home blood testing service Thriva. It helped me to get my cholesterol down without resorting to the statins that doctors were pushing towards me: 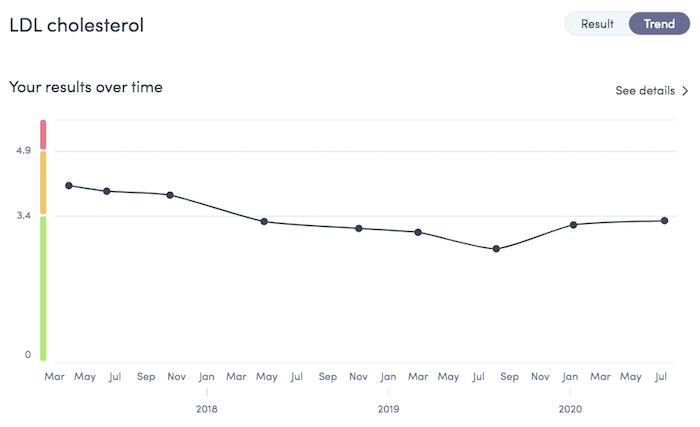 I suspect cholesterol isn’t the whole story when it comes to heart disease. But I also believe the actions I took to lower it – dietary changes, and further reducing body fat – will lead to a healthier life. I used cholesterol as a marker.

Thriva [17] tracks cholesterol and many other metrics in one place, making it very easy to monitor. Consider giving it a go. (That’s an affiliate link [17] incidentally. Sign-up via it and we both get £10 off our next Thriva [17] test.)

Monitoring today takes a pinprick blood test. It won’t be too long though until most parameters can be measured in real-time by wearables or implants.

What all this means for planning [11] for retirement is anyone’s guess.

Your first move might be to massively inflate the numbers you pop into your nearest retirement calculator [18].

Perhaps age-reversing treatments might enable you to retire fairly healthy at 85 and then to live for another 50-70 years?

You might fear this will strain your withdrawal rate [19] calculations to the limit – until you remember you’ll also have another 20 years of working and earning for your nest egg to compound before you need to touch it!

Though we can obviously assume the state retirement age will have risen above – ahem – 67 in a live-to-150 world.

Which is a clue to the real elephant in the room. Our economies are just not ready for lots of human beings to routinely live well beyond 100.

I’d imagine every annuity-providing life assurance company would go bust tomorrow if some protege of Sinclair’s announced a surefire way to give retirees an additional 30 years of extra life expectancy.

Right now the world looks gloomy. Domestic politics is dire, the earth is on fire, a new Cold War between the US and China looms – oh, and there’s a pandemic raging. It’s easier to imagine lives getting shorter than longer.

The history of progress since the start of the scientific era tells us we should hedge our bets.

I still don’t expect to live to 150, or anything like it.

But I wouldn’t rule it out!

Thanks for reading! Monevator is a simply spiffing blog about making, saving, and investing money. Please do check out some of the best articles [21] or follow our posts [22] via Facebook, Twitter, email or RSS.