Here at Monevator, a frequent request is for a post on exploiting the low costs and diversification of ETFs to generate an income in retirement [1].

And being the resident Monevator writer on all things retirement [2], the request has naturally landed in my inbox.

That said, it arrived with a faint air of apology. Our proprietor, The Investor, knows all too well that I have nailed my flag to investment trusts as a vehicle [3] for retirement income.

I do hold ETFs [4] in both of my SIPPs. I’m fully open to their merits in the wealth accumulation phase of the retirement investing journey.

But for the decaccumulation1 [5] phase of the journey, I reckon that they have their drawbacks compared to active options [6].

Are those drawbacks of a terminal, show-stopping nature? For some investors, probably not.

Are the drawbacks permanent, and unlikely to ever change? Once again, perhaps not.

From a standing start, ETFs have grown into a $3 trillion phenomenon in a remarkably short time. Tomorrow’s ETFs might assuage my concerns in a way that today’s fail to.

So as a thought exercise, let’s explore how a portfolio of income-yielding ETFs might work, and see how those drawbacks manifest themselves.

The obvious attraction of an ETF portfolio is that many ETFs are attractively low-cost [7] in terms of the fees that charge.

Moreover, in a financial world where many charges are rising, the largest ETF providers are cutting fees [8].

But that cheapness comes at a price: passivity. Basically, computer algorithms do the buying and selling, slavishly adhering to an index that the ETF in question tracks.

This is great for investors gunning for capital growth, as we at Monevator have long argued.

But do passive investments suit an investor gunning for income, not capital growth?

Here I think the arguments are less clear.

I personally know of no studies claiming that passive investments do outperform active investments on the income front – an omission that is naturally of extreme interest to someone contemplating a retirement that might be funded by them.

So ETFs are great if you have investments large enough so as to be able to live off [10] the natural yield that (say) a FTSE All-Share or FTSE 250 index tracker throws off.

Or, for that matter, a passive mix of corporate bonds and gilts; passively-focused ETFs can hold baskets of these fixed-income investments, too.

But for everyone else looking to be generate a passive income in retirement, you’ll probably be wanting the ETF to do something a little racier on the income front.

So what might that raciness encompass? Inevitably, it comes down to ETFs characterised not so much by ‘passive’ versus ‘active’, but as ‘dumb’ versus ‘smart’.

In other words, the computer algorithm will be buying and selling stocks with a view to making selective pre-programmed judgements on characteristics such as yield, P/E, market capitalisation, and even dividend record.

However that smartness comes at a cost – literally. For while passive ETFs are cheap, smart ETFs are rather more expensive.

In some cases, expensive enough to be within hailing distance of a straightforward actively-managed investment trust [11] or low-cost fund.

Quite apart from cost, there’s another dimension to consider. Suppose the computer gets it wrong?

It can happen. Take the hapless investors who piled into one of the very earliest ‘smart’ income-focused ETFs, iShares’ FTSE UK Dividend Plus (IUKD), extolling its smart stock-picking, low charges, and general all-round wonderfulness.

Launched in 2005, IUKD flourished for 18 months, delivering a FTSE-beating share price and a growing income. And then came the credit crunch and ensuing recession.

Suddenly, IUKD’s ‘smart’ algorithm and stock-picking process looked monumentally dumb. Piling into higher-yielding shares had caused it to overload with just those shares that were about to crash –and in some cases, burn.

Eleven years after its launch, IUKD is still underwater:

What about the all-important income? Here again, it’s not a pretty picture. The income plunged, too: 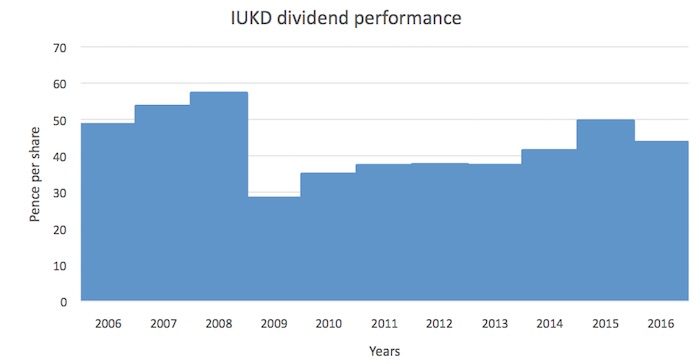 As you can see, in only one year since the credit crunch – 2015 – has IUKD’s income beaten its first year’s dividend distribution.

Investors hoping for a steadily-rising income stream, of the sort that many investment trusts deliver year on year – with a good number of investment trusts boasting a rising dividend for several decades [12] – will have been bitterly disappointed.

Not only has their capital been seriously eroded, but their income is down both in absolute terms and in relative terms – that is, relative to what they might have expected from either a purely passive ETF, or an actively managed investment trust or fund.

The good news? Thanks to the low cost of an ETF, investors in IUKD will have paid a TER/OCF ongoing expense ratio of just 0.40%.

This, of course, is significantly cheaper than the 0.42% TER/OCF ongoing expense ratio charged by (say) the City of London Investment Trust, which has raised its dividend every year for 51 years.

Striving for the dream

So is the dream of income-investing through ETFs dead?

Well, IUKD is a sample size of one. Other ETF managers have presumably learned from the experience, as will have iShares. The past is no guide to the future and all that.

So next time, in my next post, I’ll sketch out two different ETF portfolios, each intended to exploit ETFs’ virtues in a slightly different way.

One will go for the very biggest ETF providers, and the very lowest charges, and aim to deliver a globally-diversified purely passive income – from equities and fixed income investments – of the sort that you’d expect from a global investment trust or fund.

And being invested in ETFs, you’d expect to achieve that with lower fees.

The second will shop for ‘smart’ income-seeking ETFs, again with a global dimension. I will deliberately aim for a diversified spread of ETFs and ETF providers – following the logic that the algorithms will (hopefully) be sufficiently different so as to minimise the possibility of them all blowing up at the same time, à la IUKD.

Will either of them be attractive enough so as to force me to change my mind, Maynard Keynes-style?

You’ll have to wait and see.

Note: You can read all Greybeard’s previous posts about deaccumulation [2] and retirement.

Thanks for reading! Monevator is a simply spiffing blog about making, saving, and investing money. Please do check out some of the best articles [13] or follow our posts [14] via Facebook, Twitter, email or RSS.