Is this newsworthy? The Internet news-machine thinks so: 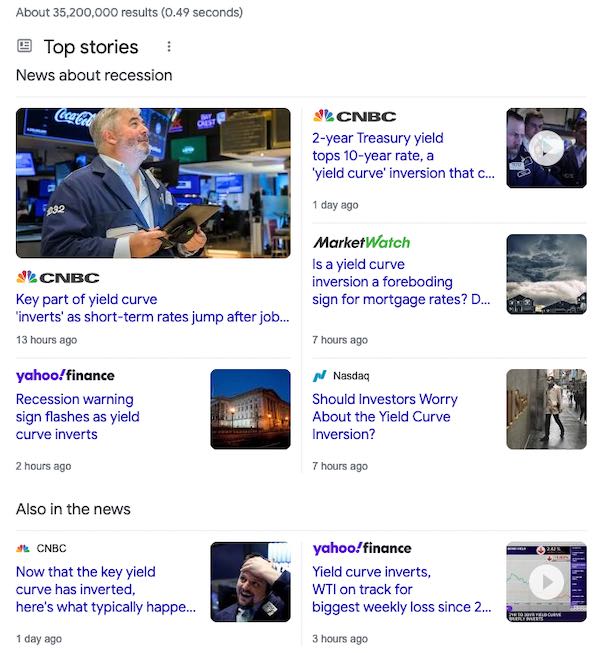 Confession time! I admit I haven’t read all 35,200,000 articles that Google tells me are available about ‘yield curve inverted’.

I’ve read maybe three. Perhaps that’s irresponsible, even if we presume 34 million of them were talking about some previous inversion of the yield curve.

Well that’s me: all rock-and-roll.

Or more precisely… like most active investors I’ve been force-fed developments in the interest rate market daily for at least six months now, like some goose being fattened for Christmas.

Thus the US yield curve finally inverting was about as surprising a development as British Summer Time. (Note: I mean the clocks going forward, not us actually getting a summer.)

Still, perhaps you have been doing better things with your time than reading about rates? Want to catch-up? Here’s a link to those search results [2]. Have at them!

Or else just read this excellent article on the yield curve inversion from Morningstar [3].

Ahead of the curve

A couple of readers have asked me what I think about this portentous event. Which is flattering, but also like asking Richard Dawkins to tell you your horoscope.

This stuff is not really my bag. However in my defense that’s a strategic decision.

You see, I don’t really think the US yield curve inverting is signalling anything we don’t already know.

And nowadays I doubt it ever could.

I’m old enough to remember when – outside of investment banks, trading floors, and economics classes – the only people who ever mentioned yield curves inverting were weirdos on discussion forums who’d at some point presumably escaped from banks, trading houses, and classrooms.

In those quieter days, the yield curve inverting was maybe a useful tell.

But honestly, I now expect my mum to tell me about the yield curve inverting when I call her this Sunday. In-between her spring gardening plans.

In theory, the US yield curve inverting is worth watching for as historically it’s presaged recessions.

In theory, again, that’s because an inverted yield curve indicates the market expects interest rates to decline in the longish-term (ten years or so out) which is the sort of thing that happens in recessions. (Due to central banks cutting rates and also market forces, as there’s a bid for safer assets).

And having advance knowledge that a recession is coming is – again, in theory – useful for investors, because recessions are bad for at least some markets.

Curves in all the right places

For starters, the yield curve has to be inverted for a while to matter. And even then it can give false positives.

But rather than listen to me waffle on about the empirical evidence, have a look at this summary [4] from the Chicago Fed. It’s pretty compelling in arguing that yes, the yield curve inverting probably does indicate a coming recession, but no we don’t really know why.

(That’s not be confused with ‘people won’t tell you they know why it forecasts a recession’. People most certainly will. Even I just gave one reason above. People are always very ready with a Why.)

Let’s just agree for now that the yield curve inverting is indeed a strong indicator of a coming recession. Does this really tell us anything new about the US or even the global economy?

I mean compared to all the information we already have about central bank plans to raise interest rates, and the soaring inflation that is causing the cost of living to skyrocket around the world?

Oh, and energy supply problems and the war in Ukraine?

I think you might accuse the yield curve of rather gilding the lily.

We know the US central bank is aiming to raise rates at least half a dozen times. If the bond market hadn’t reacted to that by pushing up short-term rates then that really would be worrying.

Personally I’ve felt recent US GDP growth was being ginned up by restocking and other artifacts of exiting lockdown, for instance, and thus that there would always be a cooling. (This was also why I expected inflation to have started to fall by now, albeit Russia has done for that).

The UK situation is murkier because of the impact of Brexit, but for what it’s worth our yield curve is flat rather than inverted, so far. But nobody watches the UK yield curve much.

What investors – and our curious readers – really want to know is what does this mean for stock prices?

Indeed some pundits seem to take it as read that the yield curve inverting is predicting not a recession but a stock market crash.

However this is not the case. If anything, I think it’s a bit bullish.

First there’s data to suggest that. For example have a look at these tables [5] showing that US stocks usually rise over most periods following a yield curve inverting.

It’s also logical, at least to me, that markets would rally in the wake of the yield curve inverting.

Because by the time the yield curve has inverted really everyone knows everything. Worries about interest rates have rumbled on for months. The yield curve flattening was kind of interesting in 2021, but now it has finally inverted is that dramatically more interesting?

It’s not irrelevant. But it’s the continuation of a trend, rather than a shocking bolt from the blue.

Shares often fall in advance of a recession – which is perhaps just what we’ve seen this time – and people have already noticed the economy has been having it ‘too good’, which is what we saw with all the euphoria in the US in 2021.

For example I was noting well before Christmas that there had been an almighty crash in high-flying growth stocks that was likely to spill into the wider market. A few readers scoffed that their trackers hadn’t moved more than a percentage point or two. Hence they weren’t bothered at all.

(Which, by the way, is totally fine. Having readers not being concerned about this stuff is an aim of this site! I’m the weirdo here.)

Anyway, as we all know the past three months did actually turn out to be quite a bit rougher. We saw technical corrections for many major stock markets and even a roughly three-second long bear market [6] for the US Nasdaq tech index.

Shares have since recovered quite a bit, despite further bad news. And now the yield curve is inverting, to tell us what you really needed to know six months ago to do much useful with.

Remember, you need to buy the rumour and sell the news [7] if you’re playing the active game. (Which, again, most people really shouldn’t).

Otherwise you’re playing the reacting game. Also known as the ‘sell low and buy high’ game. And that maths doesn’t work out so well.

To be clear I am not saying we’re definitely set for a stock market rally, or that it was obvious shares would wobble in early 2022.

I’m saying one can make vague probabilistic bets about such things, if that’s your wont.

But given that nobody really knows until everyone knows – because it’s happened, because a yield curve has inverted, say – then reacting to this stuff after the bets are in is a bit futile.

You’re better off sticking to your regular investing plan and leaving well alone.

Finally the other reason to be wary of acting on this particular yield curve inversion is that it probably reflects in-part some funny business regarding the US Federal Reserve.

I don’t mean anything nefarious. Rather that, as we all know, via quantitative easing and more recently quantitative tightening [8] central banks have been manipulating the yield curve for years.

Can the US Fed and other central banks get out of the near-zero rate era and tame inflation without triggering an economic downturn?

The Economist [9] has its doubts and so do I.

But I don’t think it means investors need fear a disastrous future, nor even change what we’re doing. At least not if you had a well-balanced portfolio to begin with.

Many companies have been posting mega-profits for the ages [10]. They have the margins to cope with inflation, take a bit of pain, and balance sheets to get to the better times.

Bonds have finally faced a bit of a reckoning. But in the long-term lower bond prices mean better returns due to higher yields. You’ll also notice that so far this bond market crash doesn’t feel anything like the equity slumps of 2000 or 2008 or 2020. Equities are always the riskier asset.

Inflation is what really hurts the return from bonds. It hits the nominal return from shares, too, of course, but shares are expected to deliver higher returns than other assets over longer-term periods, which is why they have eventually outpaced inflation.

Shares don’t hedge against inflation, in my view, but rather they beat it [11]. Subtle difference.

Maybe this time it’ll take a while for that to happen, or the recession will be worse than I expect, or some new awful thing will roll along and knock us and our portfolios for six. So stay diversified.

Concentrate on keeping an income coming in and stopping your outgoings getting out of control.

However I wouldn’t fret too much about the yield curve inverting. It is only telling us what we already almost certainly knew.

From the archive-ator: What to give a newborn niece? – Monevator [14]

Note: Some links are Google search results – in PC/desktop view you can click to read the piece without being a paid subscriber. Try privacy/incognito mode to avoid cookies. Consider subscribing if you read them a lot!1 [15]

…but it might not be too late to submit a reading to 31 March, depending – Guardian [17]

With $117bn, Warren Buffett is back among the world’s top five richest people – CNBC [19] 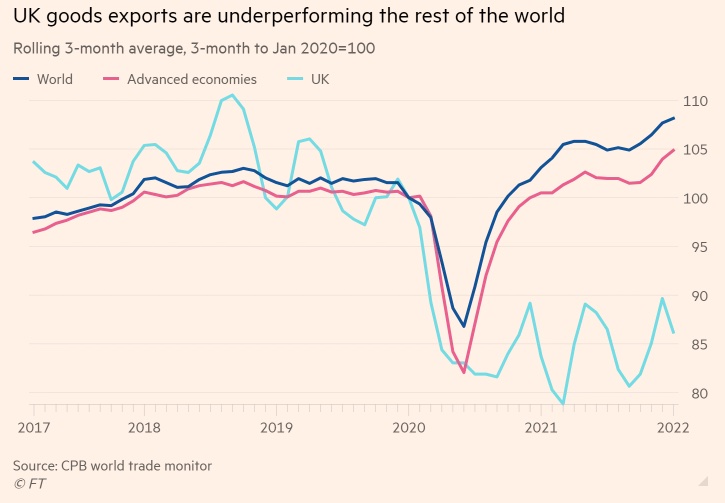 Is it cheaper to have a bath or a shower, and other energy consumption questions – Guardian [28]

What are the odds of beating inflation with Premium Bonds? [Spoiler: tiny] – Which [33]

Freed by frugality: one way to financial independence – Humble Dollar [36]

Crypto vs gold: the search for an investment bolt hole [Search result] – FT [41]

The future is unknowable: spend it all, or sock it away? – Physician on FIRE [42]

Is buying a house cheaper than renting? – Halifax/Which [43]

Has the FCA’s ‘Assessment of Value’ initiative achieved anything? – TEBI [44]

What does a bond bear market look like? – A Wealth of Common Sense [48]

How a top crypto VC makes contrarian investments – The Generalist [54]

Where are we with nasal Covid vaccines? – PLOS [61]

How effective is green investment spending? – Klement on Investing [68]

Back to the office mini-special

The realities of the four-day work week – BBC [72]

Puttering around: why small tasks feel so therapeutic – BBC [75]

“Getting your finances right is essential to 100-year life, but money is far from being the most important resource. Family, friendships, mental health and happiness are all crucial components.”
– Lynda Gratton, The 100-Year Life: Living and Working in an Age of Longevity [82]

Like these links? Subscribe [83] to get them every Friday! Note this article includes affiliate links, such as from Amazon [84] and Interactive Investor [85]. We may be compensated if you pursue these offers, but that will not affect the price you pay.

Thanks for reading! Monevator is a simply spiffing blog about making, saving, and investing money. Please do check out some of the best articles [86] or follow our posts [87] via Facebook, Twitter, email or RSS.