Recently it struck me that I’ve been writing about dividend investing for more than ten years. (Here’s my first article [1], if you’re interested – apologies for the sales pitch at the end.)

With the benefit of hindsight, I can’t imagine a better ten year period for covering the topic.

When I started out in 2006, the traditional view of dividend-paying shares – that they are reserved primarily for income-dependent investors – reigned supreme. Shortly after, the dividend world was turned upside down by the financial crisis. Not since the Great Depression had dividend cuts [2] occurred at such frequency or magnitude.

As quickly as dividends fell under the knife, however, they became hugely popular in the post-crisis, low-interest rate environment.

Whether or not you agree this has been an exciting decade for dividends, it’s been an educational one at the very least.

The cycle turns, as ever

In a previous article on Monevator, I noted that a distaste for dividends [3] seems to be taking root once more.

There are multiple explanations as to why this is occurring. At the risk of repeating myself, buybacks have increasingly been seen as an alternative means of returning shareholder cash. Investors might also look at the immense success of younger, non-dividend paying companies like Facebook or a Google, and wonder why they should instead invest in 100-plus-year-old businesses that aren’t changing the world.

To illustrate this trend, I recently spoke with another investor, also in his mid-30s, who told me: “My goal is to invest in high growth businesses until I retire. Then I’ll switch to dividend stocks.”

Indeed, Credit Suisse looked at the largest 1,000 U.S. companies, excluding financials and utilities, and broke them into the following four categories:

The bank’s researchers then back-tested the performance of these four groups of companies to 1976. The results are quite telling, and perhaps surprising: 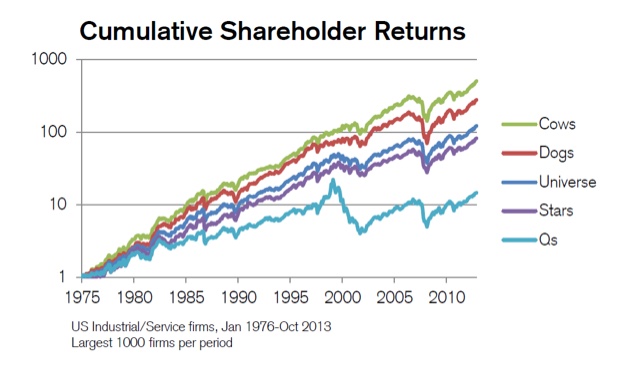 Why would cash cows and dogs do better than star companies?

The Credit Suisse research is a good reminder that an investment’s performance is ultimately a function of expectations and what actually happens. Too often, investors mistakenly extrapolate recently strong performance from high growth companies, thinking the good times will continue. The problem is, many other investors are likely doing the same.

In some cases, the good times do indeed keep rolling – or even exceed expectations, as has been the case with Facebook and the like. Competitors, however, are attracted to high growth and high profits like flies to honey.

Unless the growth company has a durable competitive advantage (an ‘economic moat’), it’s more likely that their margins will be competed away and fall short of original expectations. There’s also greater risk that management will mis-allocate capital in their effort to keep up with the competition. Ultimately, these sort of shares will be re-rated lower, which reduces returns to investors.

On the other hand, expectations for companies in the lower growth cohorts – the Cows and Dogs – in which we’ll find most dividend payers, are often too pessimistic.

Slow asset growth, for instance, could indicate a consolidating industry where survivors will benefit from improving margins and more rational competition. Low earnings expectations for well-run businesses are eventually corrected and the shares are often re-rated higher.

What does this mean for me?

It’s easy to look at some of the modern growth stock success stories, the massive wealth being created in Silicon Valley and elsewhere, and want a piece of that for yourself. It’s far less satisfying in the short-run to own a basket of slower-growth companies that may not operate in exciting industries.

You won’t exactly endear yourself to dinner party guests with a rousing discussion on the global containerboard market. [Editor’s note: I can confirm Todd speaks from experience. He tried to talk to me about packaging for over an hour on Skype once…]

What matters in the long-run – and isn’t that what we’re after? – is how well your companies perform relative to expectations. And based on evidence found in the Credit Suisse report [4] and elsewhere [5], if you’re a stock picker then your research time is probably best spent in the slower growth areas of the market.

Remember that it’s in a dividend investor’s best interest to invest when dividend-paying shares are out of favor. I think that we’ll have plenty of chances to do that in the coming years.

[6]Todd Wenning, CFA is an equity analyst based in the United States. Opinions shared here are his own and not those of his employer. A full disclaimer can be found here [7]. For compliance purposes, Todd cannot reply to comments below, though he welcomes any correspondence sent by email [8]. You can read Todd’s expanding collection of dividend articles [9] here on Monevator or check out his book, Keeping Your Dividend Edge [10].

Thanks for reading! Monevator is a simply spiffing blog about making, saving, and investing money. Please do check out some of the best articles [11] or follow our posts [12] via Facebook, Twitter, email or RSS.